For the past couple of decades conservatives have routinely railed against “coastal elites,” “left coast liberalism,” and “San Francisco values.” The latter is so popular that it has its own Wikipedia page and Bill O’Reilly insists on credit for inventing the term. And it’s not just San Francisco that’s the target of conservative scorn. 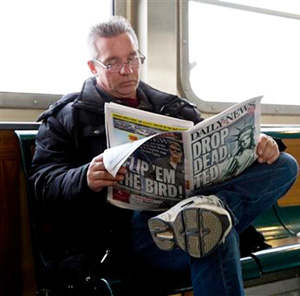 Of these, New York City is probably second only to San Francisco. It’s home to the soda nazis, the Upper West Side, rent control, the Village, abortion on demand, and, above all, the hated liberal media. Conservatives might live in New York, but they sure don’t like its values.

Nonetheless, a whole lot of them are apparently ready to crucify Ted Cruz over his quip about Donald Trump and New York values. They all knew what he meant. Hell, they all agree with him. But any port in a storm, I guess.

Life isn’t fair, and Cruz has his share of defenders. And I know it’s hard to work up any sympathy for the guy. Anything Cruz does to hasten his own doom is surely karmic justice. But of all the things to go down for, a routine crack about big city liberals surely tops the list for irony.

POSTSCRIPT: But speaking of New York values, has anyone bothered to put together a short montage of Donald Trump saying liberal things throughout the years? It wouldn’t be hard, and 60 seconds would be plenty. It seems like a no-brainer, but I don’t recall seeing anything like this. Have I just missed it?