Aaron Blake makes an interesting point today about the notion that Donald Trump and other presidential candidates are uniquely appealing this year because voters are so angry:

They’re simply not — or at least, not abnormally angry. Despite the rise of two candidates who have embraced the idea of anger, our country simply isn’t unusually angry about how things are going in Washington.

A new Washington Post-ABC News poll shows just 24 percent of Americans describe themselves as “angry” about the way the federal government works. I say “just,” because that’s actually on the low end of where 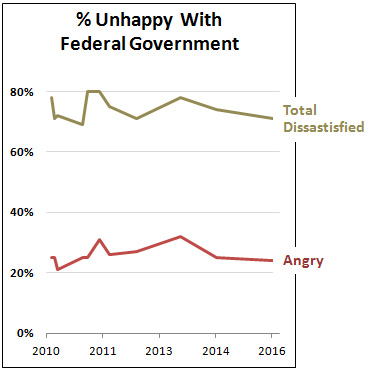 that number has been in recent years. (An additional 47 percent describe themselves as “dissatisfied but not angry.”)

It seems as though I’ve heard about the seething anger of the electorate before nearly every election in my life. Joe Klein takes a drive through the heartland every few years and reports back about this. But all sorts of polling evidence suggest that Americans aren’t really all that unhappy in general and not really all that angry about the government. No more than usual, anyway. Now, maybe this year really is different. Maybe voters are more responsive to angry appeals even if they aren’t especially angry in general. But for all the talk, Blake is right: the polling data doesn’t really show anything unusual.