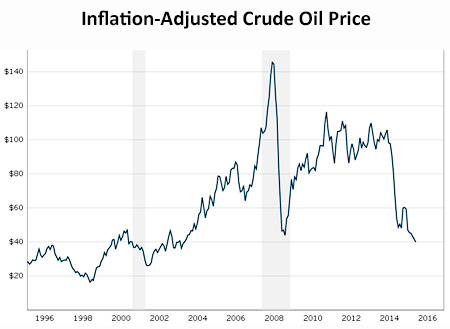 With oil prices plummeting below $40 per barrel, OPEC is meeting to decide what to do. The answer is…. probably nothing:

Oil prices dropped Friday as traders braced for official word out of a highly anticipated meeting of the Organization of the Petroleum Exporting Countries. Prices slid following conflicting media reports that OPEC had either kept its oil-output target unchanged or increased it. There was also confusion as to whether production in Indonesia, which just rejoined the group, will be included in the target.

….An internal OPEC document reviewed by The Wall Street Journal showed that, if current production remains unchanged, markets will still be oversupplied by 700,000 barrels a day in 2016….The key issue for OPEC is Iran, which is expected to return to the global oil market after the lifting of the international sanctions early next year. Analysts say the country could quickly ramp up production by around 500,000 barrels, adding to the oversupply of crude.

Between fracking, Iran, and slow demand growth thanks to the sluggish global economy, oil prices just aren’t likely to increase in the near future. This is:

Oh: and bad news for us peak oil folks. I don’t have any worries that we’ll hit peak oil eventually, but the Great Recession sure put off the date. I had long figured that 2015 was going to be the peak date, but it now looks like it will probably be 2020 at the earliest, and maybe more like 2025 or so.