A leveraged loan is sort of like a junk bond: a high-interest loan provided to a company already deep in debt. The loans are typically tranched and then syndicated to various investors by a commercial bank. They’re non-investment grade, and in today’s low-interest environment where everyone is chasing yield, they became increasingly popular in 2012 and 2013.

Except with federal regulators:

“We learned a lesson” from the financial crisis, says one former regulator who pushed for a crackdown when leveraged loans surged 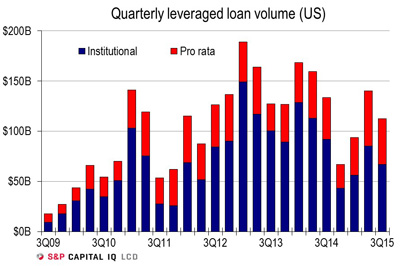 ….In response, the Fed, OCC and Federal Deposit Insurance Corp. strong-armed U.S. banks for the first time ever to comply with minimum underwriting standards on leveraged loans no matter who shoulders the credit risk….Regulators were explicit about loan characteristics that would grab their attention, such as lax repayment time lines and the absence of loan covenants. Any loan that left a company with debt exceeding six times its earnings before interest, taxes, depreciation and amortization, known as Ebitda, “raises concerns for most industries,” regulators wrote in the guidelines.

Lenders seemed to shrug—and kept on making leveraged loans….Starting in late summer, roughly a dozen big banks received a “Matters Requiring Attention” letter from the OCC and the Fed. The letters chided the banks for putting the financial system at risk because of lax and inadequate application of the leveraged loan guidelines, regulators claimed.

Banks, naturally, argue that tighter standards will deny credit to people who need it. And this is true. But just as there were lots of people who shouldn’t have bought houses in 2005 even though they really, really wanted one, the same is true of firms. Deteriorating lending standards are a normal sign of a frothy market, and we’re best off keeping a rein on bad loans now, instead of waiting for the market to collapse when a recession suddenly produces a string of defaults that ripple through the whole financial system.

Of course, if US regulators won’t allow these loans, it’s possible to go elsewhere. “The crackdown also has encouraged companies to take their leveraged loan business to firms that aren’t regulated by the Fed and OCC, such as Leucadia National Corp.’s Jefferies Group LLC and Nomura Holdings Inc. of Japan.” Stay tuned.