Jim Pethokoukis draws my attention to Ted  Cruz’s theory of why the Great Recession was so great. Here is Joseph Lawler describing Cruz’s questioning of Fed chairman Janet Yellen yesterday:

Cruz began a round of questioning by stating that, in the summer of 2008, “the Federal Reserve told markets that it was shifting to a tighter monetary policy. This, in turn, set off a scramble for cash, which caused the dollar to soar, asset prices to collapse and [the consumer price index] to fall below zero, which set the stage for the financial crisis.”

….Yellen, although used to obscure or hostile questions from members of Congress, seemed taken off-guard. “I think the Fed responded pretty promptly in easing monetary policy to the pressures that were emerging,” she responded, saying that 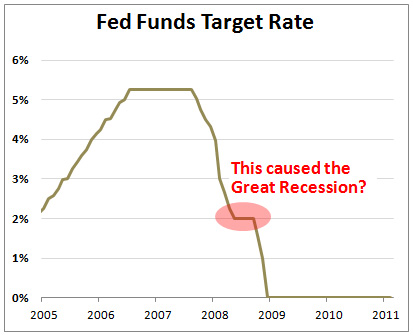 she wouldn’t blame the financial crisis on the Fed failing to lower rates during the meeting. She also noted that the Fed had lowered its target rate to zero by December.

I think you can argue that the Fed should have responded sooner and more forcefully to the events of 2008, but the problem with Cruz’s theory is that it just doesn’t make sense. Take a look at the chart on the right, which shows the Fed Funds target rate during the period in question. In April 2008, the Fed lowered its target rate to 2 percent. Then it waited until October to lower it again.

So the idea here is that if the Fed had acted, say, three months earlier, that would have saved the world. This ascribes super powers to Fed open market policy that I don’t think even Scott Sumner would buy. Monetary policy should certainly have been looser in 2008, but holding US rates steady for a few months too long just isn’t enough to turn an ordinary recession into the biggest global financial meltdown in nearly a century.

Cruz would like to blame the Fed, but they bear only a modest responsibility. Better culprits include underregulation of shadow banking; a housing bubble fueled partly by fraud and partly by Wall Street irresponsibility; excess systemic leverage; and Republican unwillingness to fight the recession with fiscal policy. Unfortunately, none of those fit Cruz’s agenda. So the Fed it is.