Republicans and Democrats have agreed on a year-end budget package that will increase the deficit by around $500 billion or so. There’s been a bit of grumbling about the bill from the Republican side, but mostly it’s not about the spending. It’s about the lack of shutdown bait like defunding Planned Parenthood and banning Syrian refugees. Paul Waldman comments:

Let’s be honest: despite all their talk about what we’re handing to the next generation and how government should balance its books just like a family does, when it comes down to actually making choices, Republicans are no more concerned about deficits than Democrats are. Crying about the deficit is a tool they use to constrain policies they don’t like. When it comes to the policies they do like, how much the government will have to borrow to fund them is barely an afterthought. So can we stop pretending they actually care about deficits?

I doubt it. Loads of people have been making this very simple point for years and years, but it’s done no good despite the plain evidence of the past few decades. Reaganomics was explicitly built on the idea that Republicans had paid 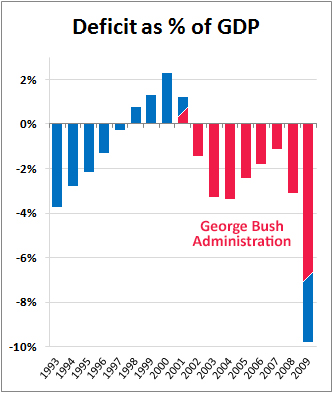 far too much attention to deficits in the past. George Bush the Elder passed a budget bill that actually did reduce the deficit, and was pilloried for it. George Bush Jr. blew up the deficit with tax cuts and Republicans thought it was great. Over the past 35 years, the only time Republicans have seriously tried to rein in the deficit was during the Clinton and Obama administrations.

Republicans routinely insist that they care deeply about balanced budgets, and just as routinely this claim gets reported at face value. All the evidence in the world points in exactly the opposite direction, but it doesn’t matter: the conventions of journalism require reporters to pass along what politicians say, not what they mean. Overall, this is probably a good thing. But it sure does make it hard for the average Joe to understand what’s really going on.