The overwhelming majority of violent criminals are Democrats. The media doesn’t report that.

Huh. Could be, I suppose. Most convicted felons are pretty poor, and poor people tend not to vote for Republicans. Why would they? Of course, they tend 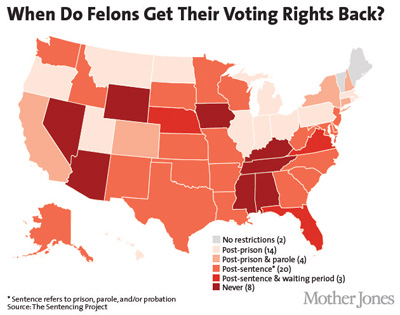 not to vote for Democrats, either. They just don’t vote.

Presumably, Cruz got his data from this study, which estimates that 73 percent of “hypothetical felon voters” would vote for Democrats. However, a more recent study that looks at how many actual felons register as Democrats puts the number at 62 percent for New York, 52 percent for New Mexico, and 55 percent for North Carolina. That’s still not bad, Democrats! You have the felon vote cornered. Except for one thing: only about a third of them registered at all, only about a fifth have active registration records, and only about 10 percent or so actually voted for president recently. Liberals may generally be in favor of allowing released felons to vote, but it sure isn’t because they think it will help them at the polls. Working for felon voting rights is about the most inefficient and futile way imaginable of getting out the vote.

In any case, anyone can play this game. Just find some demographic group that tends to vote for Party X, and then find some bad thing also associated with that group. In this case, poor people tend to vote for Democrats, and felons tend to be poor. Bingo. Most felons are Democrats.

We could do this all day long, but what’s the point? The whole exercise is kind of silly. If Ted Cruz wants some attention, he’s going to have to do better than this.