After Democrats won the White House in 2012 despite enormous amounts of spending by conservatives, the Koch brothers commissioned a study. It concluded that their efforts had been hampered “by the widespread perception that conservatives don’t care about the plight of regular folks struggling to make ends meet ? let alone the underprivileged.”

Where would people get that idea? In any case, apparently the Kochs became obsessed with the “empathy gap,” a poll result showing that Mitt Romney did abysmally on the question of whether 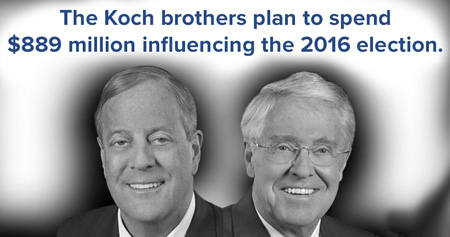 he “cares about people like me.” So they launched the Well-Being Initiative:

The outreach includes everything from turkey giveaways, GED training and English-language instruction for Hispanic immigrants to community holiday meals and healthy living classes for predominantly African American groups to vocational training and couponing classes for the under-employed. The strategy, according to sources familiar with it and documents reviewed by POLITICO, calls for presenting a more compassionate side of the brothers’ politics to new audiences, while fighting the perception that their groups are merely fronts for rich Republicans seeking to game the political process for personal gain.

So how’s it going?

And one former network executive said, “There are a lot of high-up lieutenants who roll their eyes when they talk about this and question whether it’s getting any bang for the buck. How does teaching people how to clip coupons or giving them free turkeys translate into convincing them that conservatives or Republicans have the best interests of the disadvantaged at heart? Is this really changing people’s minds or are they just showing up for the free turkeys?”

But is it changing perceptions that the Kochs are basically just a front for rich Republicans seeking to game the political process for personal gain? Nah. A free turkey only goes so far, after all.