Via Christopher Ingraham, we have some new research showing when to get married if you want to minimize your risk of divorce. Here is 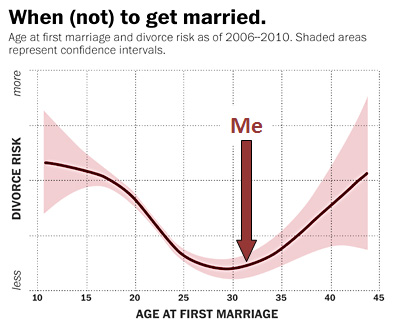 Hmmm. In the chart it looks more like 29 is the ideal age, but I got married at 32, so I’ll take it. Unfortunately, this is for people getting married now. For people who got married back when I got married, the older the better. Today, for some reason, it’s the older the better until age 32, and then the divorce risk curves back up. Why the change? After a bit of statistical argle bargle, Wolfinger admits he can’t really figure it out. But he’s willing to guess:

My money is on a selection effect: the kinds of people who wait till their thirties to get married may be the kinds of people who aren’t predisposed toward doing well in their marriages. For instance, some people seem to be congenitally cantankerous. Such people naturally have trouble with interpersonal relationships. Consequently they delay marriage, often because they can’t find anyone willing to marry them. When they do tie the knot, their marriages are automatically at high risk for divorce. More generally, perhaps people who marry later face a pool of potential spouses that has been winnowed down to exclude the individuals most predisposed to succeed at matrimony.

I totally agree on the congenitally cantankerous observation, but I’m not sure that’s changed much since 1995. There were lots of cantankerous people back then too. So I’ll put my money on some other explanation. I’m just not sure what it is yet.