Pew Research routinely comes out with long, detailed surveys of interesting things, and I usually thumb through them looking for intriguing tidbits. Today it’s “Parenting in America,” and you’ll be unsurprised to learn that middle-class parents generally have a more positive view of things than poor parents. I may 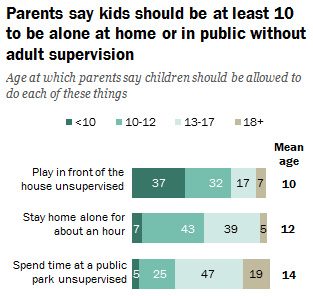 have more to say about this later, but in the meantime here’s a tidbit that answers a question I’ve pondered more than once: how old should kids be before they’re allowed to do stuff on their own?

Ditto for the others. I suppose 12 isn’t unreasonable for staying home alone, but again, a substantial fraction think you need to be 14 or 15 or even 18.

As for public parks, holy cow. The average age for allowing kids to play in a park without adult supervision is 14, and there’s a substantial fraction who think you literally have to be an adult yourself before you should be allowed to go to a park on your own.

Still, the overall numbers sure strike me as high. Of course, I’ve led a sheltered existence, so maybe I just don’t get it. But the world is a safer place than it was 30 years ago. Do kids really need to be ten just to play in the front yard these days?

1I called my mother to confirm this. She did.