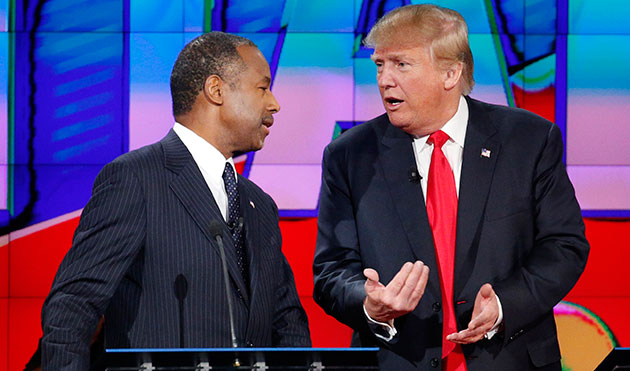 HEWITT: What’s your priority among our nuclear triad?

TRUMP: Well, first of all, I think we need somebody absolutely that we can trust, who is totally responsible, who really knows what he or she is doing. That is so powerful and so important. And one of the things that I’m frankly most proud of is that in 2003, 2004, I was totally against going into Iraq because you’re going to destabilize the Middle East. I called it. I called it very strongly. And it was very important.

But we have to be extremely vigilant and extremely careful when it comes to nuclear. Nuclear changes the whole ball game. Frankly, I would have said get out of Syria; get out—if we didn’t have the power of weaponry today. The power is so massive that we can’t just leave areas that 50 years ago or 75 years ago we wouldn’t care. It was hand-to-hand combat.

HEWITT: Of the three legs of the triad, though, do you have a priority? I want to go to Senator Rubio after that and ask him.

TRUMP: I think—I think, for me, nuclear is just the power, the devastation is very important to me.

I seriously want to hear anyone on the right side of the aisle defend Trump as a potential commander-in-chief after hearing this. Any conservative who still wants this guy as president has forfeited their last smidgen of credibility as anything more than a crude partisan hack.