One of the things that kind of fascinates me about Donald Trump1 is the fact that he doesn’t even pretend that his attacks are real. His latest 2-minutes hate has been directed at Bill Clinton, and he’s pretty much admitted that he doesn’t really believe the stuff he’s saying. But if Hillary attacks him, 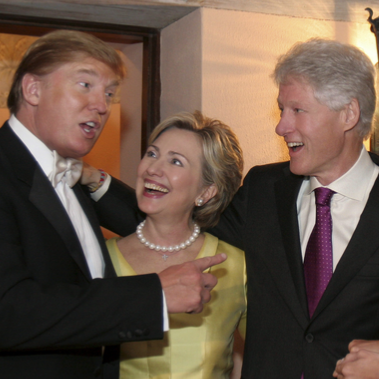 he has to attack back. Here’s Rebecca Sinderbrand:

Trump on HRC: “Had to mention her husband’s situation. And now it’s the biggest story on television by a factor of 10. So you have to do it“

He had to do it—delivered with the usual Trumpish shrug of the shoulders. That’s all. And if Hillary stops, he’ll stop. It’s business, not personal.

This is an odd quirk in Trump’s personality. He seems to have an ironclad rule against ever attacking someone first. Even Vladimir Putin. Putin says nice things about Trump, so Trump has to say nice things back. Opposing candidates who don’t attack him are “great guys.” But if you attack first, then he has to fire off a nuclear retaliation. There’s an odd kind of chivalry at work here, and I suppose it also provides people with a motivation to leave him alone.

This may also be responsible for the odd silence about Trump from everyone who knows him. I’ve been wondering for a while whether Trump has any friends. Real friends, that is. Not family members, not people who work for him, and not celebrity buddies who have a casual acquaintance with him. I’m talking about people he’s worked with frequently and who like him. People he hangs out with regularly. People from his childhood or college years that he’s stayed close to. Are there any?

I can’t tell. Nobody from the New York development community seems willing to say anything about him, which would make sense if they all dislike him but don’t want to trigger a temper tantrum. Who needs the grief, right? How about childhood friends? Not that I’ve heard of. Trump seems to view people almost entirely transactionally, as assets to be deployed, so it would hardly be surprising if none of them had stayed close. Given his penchant for demanding sycophancy, and lashing out instantly against even a hint of criticism, I suppose it would be hard to have any real long-term friends or even any long-term business pals. It’s kind of sad, actually.

1Against my will, but there you have it.