The American economy added 211,000 new jobs last month, 90,000 of which were needed to keep up with population growth. This means that net job growth clocked in at a brisk 121,000 jobs—nearly all of it in the private sector. The headline unemployment rate stayed steady at 5.0 percent. All of this gain was because more people were employed, not because folks were dropping out of the labor force. In fact, the labor participation rate inched up a bit, and the number of people not in the labor force inched down. This number is genuinely due to more people getting jobs.

Unfortunately, this didn’t translate into good wage growth, as it did last month. Hourly earnings of production and nonsupervisory employees were up imperceptibly and weekly earnings were essentially flat too. Still, this report is basically good news, and certainly good enough for the Fed to go ahead and raise rates for the first time in a decade. This may not be a good idea, but it was inevitable in the face of anything other than an economic collapse, and it probably isn’t really all that big a deal. It won’t help things, but I doubt that it will hurt much either. 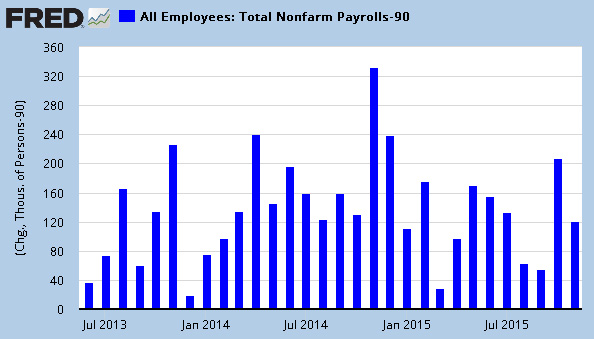