Over at the Washington Post, Jessica Contrera has a list of what’s out and what’s in for 2016. I assume that all the out stuff used to be in, and I was curious how many I had heard of. Answer: 45 out of 64. There were 19 items on the list that I had no clue about. Vetements? Ghosting? Pulp? (Actually, I’ve always liked my OJ pulpy, but I didn’t know this had become a thing.) Additionally, there 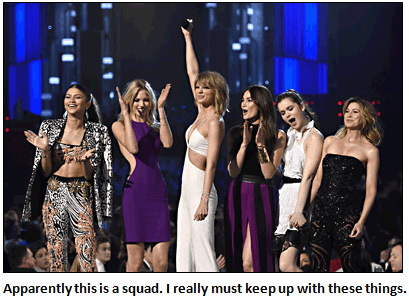 are items like squad goals and walls, which I either understand or can figure out, but which I also didn’t know had become things. I assume squad goals are like group goals, but for small groups? Let’s google it.

Crap. I was totally wrong:

Everyone has a different name for that group of friends you do everything with….A group of friends is called a squad now (as seen in the phrase: squad deep, when your whole crew is together). Squads, of course, have goals….So, what are squad goals, then? Well, there’s no official definition for it (yet), but here’s mine:

Squad Goal (skwäd/??l) (noun) (plural noun: squad goals): an aspirational term for what you’d like your group of friends to be or accomplish.

Your squad goals are entirely dependent on the members of your squad; so, while some people’s squad goals involve looking like the celebs in the famous Ellen selfie, others might involve reading every Jane Austen book in the NY Public Library. Much like eating a Reese’s, there is no wrong way to squad goal.

This was a thing in 2015? Seriously? I guess this is yet another reason I’m not really going to miss 2015. I’m guessing that 2016 is the year that Donald Trump finally gets his inevitable comeuppance, so it’s almost bound to be better. Right?