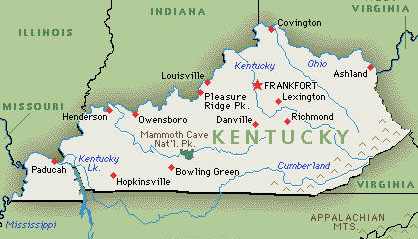 Last year I wrote a post about the Democrats’ problem with the white working class. You can read the whole thing here, but the short version is this: the white working class really hates welfare, and unlike all of us hyperverbal liberal types, they don’t view it as some kind of abstract “policy.” It’s far more personal: “For them, the poor aren’t merely a set of statistics or a cause to be championed. They’re the folks next door who don’t do a lick of work but somehow keep getting government checks paid for by their tax dollars. For a lot of members of the white working class, this is personal in a way it just isn’t for the kind of people who read this blog.”

Like anyone, I enjoy seeing my opinions confirmed, so I was pretty happy a couple of days ago to see a long piece on ProPublica by Alec MacGillis that took on this exact subject. MacGillis did a lot of shoe-leather reporting on this issue, and came to the same conclusion I did. Using Kentucky as his case study, the question he’s addressing is why so many poor communities vote against the very policies that help them the most:

The people who most rely on the safety-net programs secured by Democrats are, by and large, not voting against their own interests by electing Republicans. Rather, they are not voting, period. They have, as voting data, surveys and my own reporting suggest, become profoundly disconnected from the political process.

The people in these communities who are voting Republican in larger proportions are those who are a notch or two up the economic ladder — the sheriff’s deputy, the teacher, the highway worker, the motel clerk, the gas station owner and the coal miner. And their growing allegiance to the Republicans is, in part, a reaction against what they perceive, among those below them on the economic ladder, as a growing dependency on the safety net, the most visible manifestation of downward mobility in their declining towns.

….These voters are consciously opting against a Democratic economic agenda that they see as bad for them and good for other people — specifically, those undeserving benefit-recipients in their midst. I’ve heard variations on this theme all over the country: people railing against the guy across the street who is collecting disability payments but is well enough to go fishing, the families using their food assistance to indulge in steaks.

….With reliance on government benefits so prevalent, it creates constant moments of friction, on very intimate terms, said Jim Cauley, a Democratic political consultant from Pike County….Where opposition to the social safety net has long been fed by the specter of undeserving inner-city African-Americans — think of Ronald Reagan’s notorious “welfare queen” — in places like Pike County it’s fueled, more and more, by people’s resentment over rising dependency they see among their own neighbors, even their own families. “It’s Cousin Bobby — ‘he’s on Oxy and he’s on the draw and we’re paying for him,’ ” Cauley said. “If you need help, no one begrudges 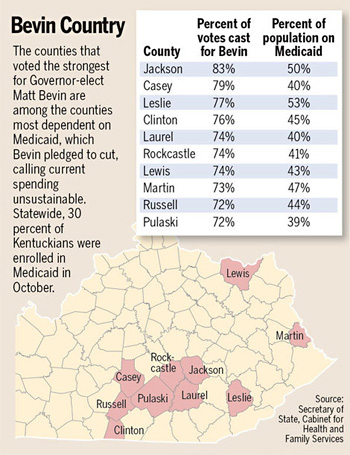 you taking the program — they’re good-hearted people. It’s when you’re able-bodied and making choices not to be able-bodied.” The political upshot is plain, Cauley added. “It’s not the people on the draw that’s voting against” the Democrats, he said. “It’s everyone else.”

This helps explain a much-discussed article in the Lexington Herald-Leader a week ago. It concluded that counties with the highest number of Medicaid recipients were also the most reliable voters for Republican Matt Bevin—despite the fact that Bevin had loudly insisted that he would slash Medicaid if he won the election. It’s not that all these Medicaid recipients were voting against their self-interest. They weren’t voting one way or the other—and all the while, their slightly less-poor neighbors were voting to cut them off.

This news won’t necessarily surprise anyone, and it doesn’t really point toward any obvious solutions, either. But it’s nevertheless worth a few minutes of your time to read MacGillis’s piece. It takes the problem out of the realm of the abstract and puts some meat on its bones. If you want to get a feel for what safety-net politics looks like at ground level, click the link.