I’m back. I’ve now done my civic duty yet again, so I’m safe until the next time the Orange County justice system wants me to sit around all day and curse at unreliable Wi-Fi coverage. Oddly, their Wi-Fi is worse than it was the last time I was there, three or four years ago. 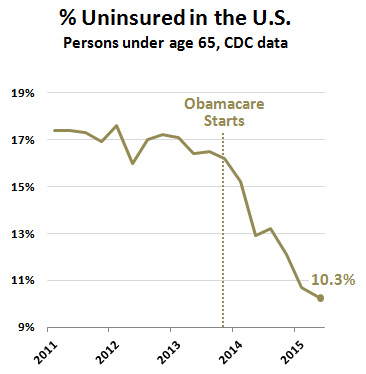 I think they’ve outsourced it since then. On the bright side, this time around I could provide my own internet connection, so I don’t care that much. Plus, since I never get actually called for a jury these days, I’ve once again preserved my record of being foreman on 100 percent of the juries I’ve ever sat on.

As your reward for waiting around all day for me, here’s the latest CDC data on the uninsured rate. Being the big government agency they are, they’re just getting around to crunching the numbers for the second quarter, and they report that Obamacare has driven the uninsured rate down yet again, to 10.3 percent.1 Not bad for a program that, I’m told, is in a death spiral and will implode any second now.

1Gallup says the uninsured rate in the second quarter was 11.4 percent. The difference comes from who they count. Gallup counts everyone over 18. CDC counts everyone under age 65.