Back in 2004, the FBI served Nicholas Merrill with a National Security Letter. Merrill owned Calyx Internet Access, and the FBI wanted him to turn over transactional records about his clients. As usual with NSLs, this was done without a subpoena or a court order. Merrill was forbidden from revealing the contents of the NSL or even publicly acknowledging that he had received an NSL.

Merrill went to court, and US District Judge Victor Marrero initially ruled against him. Merrill subsequently reached an agreement with the government that allowed him to discuss the NSL but not to reveal which records the FBI had requested. Merrill continued to fight, and today, in Merrill v. Lynch,1 Marrero finally ruled definitively in his favor. In cases like this, the government has to demonstrate that disclosure would cause specific harm, and Marrero found that they hadn’t done so. Among other things, he points out that the Department of Justice itself already publishes a manual that includes sample language for NSLs. It includes most of the 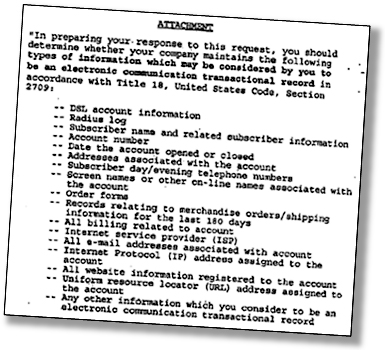 transactional data the the FBI requested from Merrill, and the remaining items would hardly be difficult for a potential target to figure out.

Still, the FBI argued that there were some differences, and those should be kept secret. Marrero provides an example that he finds singularly unimpressive:

Thanks to Marcy Wheeler for pointing this out. You may consider it your entertainment for the day. That is, you could consider it in that light if it weren’t a pretty important subject. And unfortunately, the court’s ruling is quite narrow: the only reason Marrero changed his mind is because the investigation has been closed, the target has been revealed, and virtually everything else about the NSL is already public. In other words, this will have very little impact on the government’s future power to issue tens of thousands of NSLs with virtually no oversight. We now know what information the FBI wanted in 2004, but we’re no closer to knowing what they routinely ask for today.