Over at Vox, Christopher Faricy tells us that both Democrats and Republicans like to give away free stuff:

The main difference between the two political parties is not whether to deliver government benefits to supporters but rather who those supporters are. The Republican Party’s core socioeconomic voting groups are wealthier households and businesses, both of which benefit when social welfare is provided through the tax code rather than through explicit spending.

We are talking here of tax expenditures, that lovely oxymoron in which welfare for the rich is disguised as a tax cut. Tax expenditures include just about anything that gives people a tax break: health savings accounts, retirement 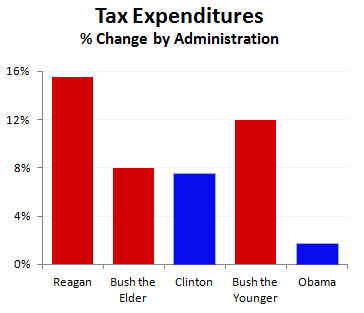 accounts, the mortgage interest deduction, and so forth. These are usually pitched as ways to help the average Joe, but in fact the average Joe usually doesn’t take much advantage of them. And when the average Joe does, his tax rate is low enough that it doesn’t help much.

Bottom line: To quote Jeb Bush, the Republican message is “Get in line, and we’ll take care of you with free stuff.” But only if the free stuff goes to corporations and the wealthy.