Nobody was in favor of raising the minimum wage last night:

Trump: Taxes too high, wages too high, we’re not going to be able to compete against the world….People have to go out, they have to 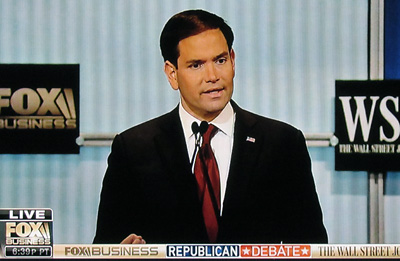 work really hard and have to get into that upper stratum.

Carson: My first job working in a laboratory as a lab assistant, and multiple other jobs. But I would not have gotten those jobs if someone had to pay me a large amount of money….I would not raise it. I would not raise it, specifically because I’m interested in making sure that people are able to enter the job market and take advantage of opportunities.

Rubio: If I thought that raising the minimum wage was the best way to help people increase their pay, I would be all for it, but it isn’t. In the 20th century, it’s a disaster. If you raise the minimum wage, you’re going to make people more expensive than a machine.

So we have a billionaire who says people just have to suck it up and work harder; a neurosurgeon who doesn’t realize he got paid minimum wage for his jobs as a kid; and a senator who thinks it’s still the 20th century. But one thing is for sure: they’re in favor of cutting taxes on the rich and keeping wages low for the poor. Sweet.