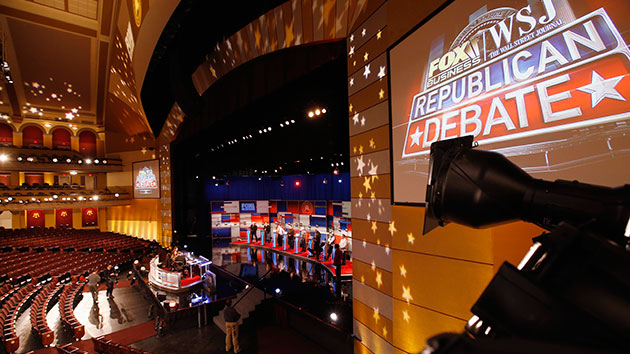 After a while, these debates all seem to blur into one another. But let’s take a crack at evaluating tonight’s performances.

John Kasich was very aggressive tonight, barging in and demanding time frequently. At times, he took a moderate stance, suggesting that the others were nuts. At other times—on foreign policy, for example—he was trying to sell himself as the toughest guy on stage. It’s a high-risk-high-reward strategy, which is probably appropriate for him right now. Overall, I’d say he benefited a bit, though it’s a little hard to say for sure. There were clearly a couple of points when the crowd wasn’t with him.

Ben Carson sort of faded into the woodwork. He didn’t really address any policy issues at all. He mostly just offered a gauzy vision of making America better and then rambled a lot. He’s going to have to defend his assertion that he could take out ISIS “fairly easily,” and that might not go well for him. Not a good night for him.

Donald Trump was fairly restrained. He had the best impromptu line of the night when he asked Carly Fiorina, “Why do you keep interrupting everyone?” Probably not fair, but a good barb nonetheless. On another subject, 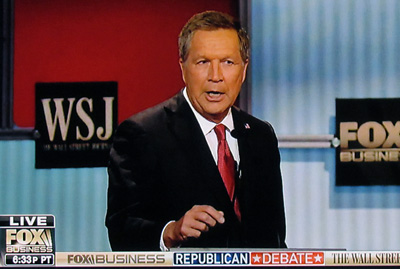 his mini-fight with Bush was, perhaps, the first time he’s really articulated his vision of staying out of the Middle East and letting everyone else fight it out for us. I’m not sure how that will go over.

Jeb Bush was, as usual, unremarkable. I don’t think he made any big mistakes, but I don’t think he helped his cause either. He tried to sound tough on foreign policy, but his actual proposals were tepid. And he was overtly dovish on immigration, which might not help him either.

Ted Cruz was his usual blustery self. I’d sure like to know the fifth agency he wants to eliminate, though. Overall, he said nothing new or memorable.

Carly Fiorina was in fine fettle. She apparently decided before the debate to mention “zero-based budgeting” and “three-page tax plan” every possible chance she got. I think she even shoehorned it into a question about foreign policy. I’m just not sure this works, though. Zero-based budgeting was a conservative hot button 30 years ago, but nobody much cares about it today. And the three-page tax plan just isn’t going to resonate if she continues to refuse to say what would actually be in this plan.

Marco Rubio was pretty controlled, and got his points across regardless of what the moderators asked. His machine-gun style doesn’t do much for me, but I suppose it might seem knowledgeable and high-energy to some people. However, one of these days he might actually have to answer that question about his child tax credit being a new entitlement. Luckily for him, that stuff all bogged down in a discussion about “refundable” tax credits, which I doubt many people understood.

Bottom line: I’d guess that Rubio, Fiorina, and Kasich might benefit a little from their performances. Bush, Cruz, and Trump probably stayed even—though Cruz’s bluster might have gone over better than I think. Carson might dip a bit. Paul will stay the non-factor he’s always been.

The moderators were OK, but boy did they maintain the reputation of Fox for going easy on Republicans. They didn’t push at all on anything that might have hurt any of the candidates. And despite Bartiromo’s promise, none of them even remotely tried to challenge the candidates on their tax plans. They basically asked how it would add up, and then let their answers stand without comment.

OK, I’m up for this. Are you up for this? Sure you are! Together, we can get through the full two hours. We can do it! We can!

11:11 – Kasich worries about his children and grandchildren if Hillary Clinton is president.

11:01 – Bartiromo: Hillary Clinton has an impressive resume. Audience boos. Not really sure what the question is, but Rubio says Hillary sucks and this election is about the future.

10:54 – Kasich: Put a sock in it, Cruz. Real executives need to make decisions, not philosophize. Kasich says he wouldn’t bail out banks, but would help the hardworking folks who put money in the bank. Big boos!

10:51 – Cavuto: Just to be clear, if Bank of America were on the brink, would you let it fail? Cruz: Yes. Also: we need fewer philosopher kings at the Fed. And the gold standard would be great for working men and women!

10:50 – Cavuto: Would you go after Wall Street crooks like Bernie Sanders? Freudian slip, I guess. Cruz would “absolutely” go after them. 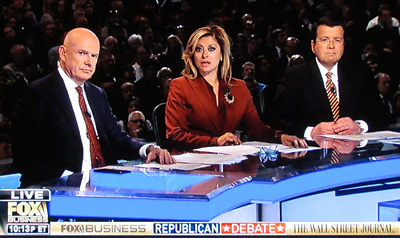 10:46 – Question to Carson about big banks. This ought to be good. Answer: shouldn’t allow banks to “just enlarge themselves at the expense of smaller entities.” Low interest rates are bad. We need less regulation. Hurts the poor and middle class because it raises the cost of a bar of soap by ten cents. Baker: OK, but would you break up the big banks? Carson: I wouldn’t allow them to get big in the first place. But, no, I wouldn’t tear down banks that already exist.

10:40 – Bush thinks we should raise capital requirements on banks. He says we’ve reduced them. This is totally wrong.

10:37 – Kasich winds up with yet more whining about not getting enough time. Put a sock in it, John. Besides, what about Ted Cruz? He seems to have virtually disappeared for the past half hour.

10:36 – Kasich: If anyone cyberattacks us, they should know we will destroy their means to perform cyberattacks. Not really clear what this means. Then a tour of the world showing what a tough guy he is.

10:28 – Fiorina says she’s met Putin not in a green room, like Trump, but in a private meeting. Yee haw!

10:26 – Bush says Trump is full of shit. Trump says we have no idea who the rebels are. Look at Libya. Look at Iraq. He almost sounds like a Democrat. Almost.

10:24 – Trump is now in full ADD mode on foreign policy. Syria! China! Putin! Ukraine! Germany! But we can’t be policeman of the world.

10:22 – Bush says America needs to lead in the Middle East. But his plan is distinctly small-bore: no-fly zone, support the rebels, think about the refugees.

10:18 – Carson: we have to oppose Putin in Middle East. But it’s very complicated. Carson’s plan for ISIS: We have to make them look like losers. We do that by taking their oil fields and then destroying them. “We could do this, I believe, fairly easily.” Carson says he learned that from “several generals.” Names, please!

10:16 – Is anyone ever going to ask Fiorina to describe her tax plan? Come on. It’s only three pages long!

10:14 – Paul thinks Congress should have the ability to amend treaties. This would, of course, make it impossible to negotiate treaties.

10:11 – Trump says TPP is worst trade deal ever. We should sign deals with each country separately instead. Baker: Is there anything in particular you dislike about TPP? Trump: It doesn’t do anything about currency manipulation. China is killing us! Rand Paul points out that China isn’t part of the deal.

10:10 – Kasich tries to barge in. Baker finally shuts him up. Kasich is whining a lot tonight.

10:09 – Now Fiorina goes into yet another riff about zero-based budgeting and the three-page tax code. Jesus.

10:07 – Now everyone wants to chime in to show that they want a kick-ass military too.

10:05 – Now Rubio and Paul get into a fight. Somehow this ends up with Rubio saying he wants to spend more on defense, unlike Paul, who’s a big wimp. Then a riff about having the most powerful military in the world. Huge cheers.

10:04 – Baker asks Rubio if his child tax credit is just a new entitlement. Rubio doesn’t really respond. He just natters on about how important the family is.

9:52 – Cavuto wants to know which tax plan God would prefer: Trump’s or Carson’s? Carson sort of rambles on about proportionality and putting more money in people’s pockets. Also: his plan will include some kind 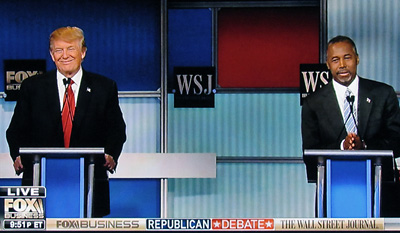 of rebate for poor people. I believe this is news.

9:49 – The moderators are fulfilling their assigned roles and asking softball questions almost exclusively. Bartiromo said she was going to get to the bottom of all the tax and budget plans, but so far she’s done virtually none of that.

9:45 – Fiorina: Nobody can possibly understand Obamacare. Follow-up: What’s the alternative? Fiorina: high-risk pools. Obamacare is helping no one and crushing small business. We need free market health care. Also: again with the three-page tax code. Fiorina is really obsessed with this tonight.

9:42 – Cruz delivers pretty good line about elite opinion on immigration being different if it was bankers or journalists crossing the Rio Grande. Probably so!

9:34 – Finally, Kasich starts a fight with Trump over immigration. Then he defends Ohio’s honor.

9:27 – Very subdued debate so far. Everyone seems to have decided that fighting each other just makes the whole field look like children. I wonder how long this will last?

9:26 – Rand Paul goes through a riff on the Fed that I honestly didn’t understand. Plus: we should all move to cities and states with Republicans in charge.

9:10 – Rubio: if we raise the minimum wage, people will be more expensive than machines. We need more welders and fewer philosophers. (No, I don’t get it either.)

9:08 – Carson: people need to be educated on the minimum wage. Wages are too high. Lower wages will create more jobs. High wages create dependency, or something.

9:06 – Trump opposes $15 minimum wage because….we don’t win anymore. Also: wages are too high. People are just going to have to buck up.

9:04 – Could Jeb Bush possibly look less enthusiastic during the introductions?

8:57 – Everybody is already at their podiums. I miss having them walk in and wave.