That paper by Angus Deaton and Anne Case about middle-aged white men dying at higher rates seems to be having a second life, so I want to highlight something that I might have buried in my initial post about it: it’s not just middle-aged men. This is right in the paper, with a colorful chart and everything. Every single white age group, from 30 to 65, has seen a big spike in deaths from alcohol, suicide, and drug overdoses: 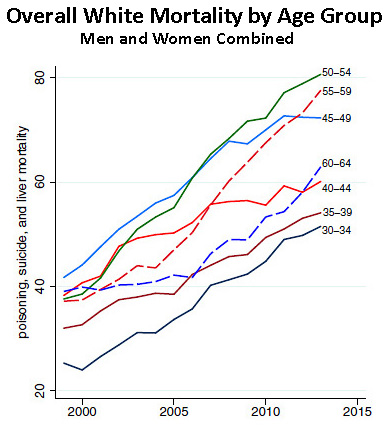 And it’s white women too:

The change in all-cause mortality for white non-Hispanics 45–54 is largely accounted for by an increasing death rate from external causes, mostly increases in drug and alcohol poisonings and in suicide. (Patterns are similar for men and women when analyzed separately.)

So why is everyone focusing solely on middle-aged men? Because that’s what the paper focuses on. However, the authors make it very clear that every age group is affected:

The focus of this paper is on changes in mortality and morbidity for those aged 45–54. However, as Fig. 4 makes clear, all 5-y age groups between 30–34 and 60–64 have witnessed marked and similar increases in mortality from the sum of drug and alcohol poisoning, suicide, and chronic liver disease and cirrhosis over the period 1999–2013; the midlife group is different only in that the sum of these deaths is large enough that the common growth rate changes the direction of all-cause mortality.

In other words, midlife men make for a more dramatic chart because the line actually changes direction. But there’s nothing magic about zero. If you go from a slope of -5 to -1, that’s still a lot even if the line hasn’t changed direction. What’s more, whatever it is that makes the change in overall mortality bigger for midlife men, it’s not the suicide, alcohol, and drug overdoses that the authors focus on. The chart above makes that clear. In fact, the midlife group appears to have seen a smaller growth in those things than both the younger group and the older groups. This would be clearer if the chart were drawn differently, but since the authors don’t include a table with raw data, I can’t do that.

Bottom line: There’s been a sharp increase in death by suicide/alcohol/drugs among all whites of all age groups from 30-65. Whatever the reason, it’s not something that applies solely to middle-aged white men.