The latest Pew report on illegal immigration from Mexico shows that the flow of people across the southern border continues to slow. There are fewer immigrants coming to the US and there are fewer going back to Mexico. In total, 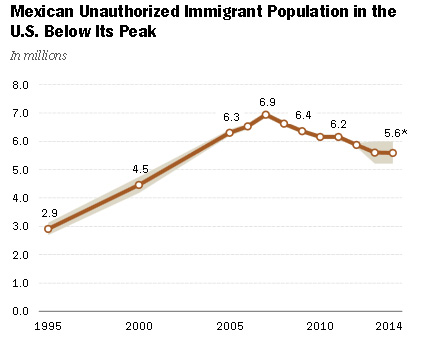 the flow of people across the border has declined by a third over the past five years, and there are now more people leaving than coming. Pew estimates that the total population of unauthorized Mexican immigrants in the US has declined by 1.3 million since 2007.

Why? The slowing American economy, especially in border communities, is one reason. A desire to reunite with family members is another. Fewer connections in the US is yet another. And in terms of total immigration, Mexico is now only barely ahead of other countries, according to a question used in the American Community Survey:

Under this measure, 246,000 Mexicans, 195,000 Chinese and 199,000 Indians arrived in the U.S. in 2013 and 2012….Regardless of the exact number of new immigrants from each country arriving in the U.S. each year, the trends are clear: Over the past decade, immigration from China and India to the U.S. has increased steadily, while immigration from Mexico has declined sharply.

Keep this in mind the next time you hear Donald Trump or another Republican demagoging about walls and rapists and all the rest. Illegal immigration from Mexico is down substantially, and it’s becoming a smaller problem every year, not a bigger one.