Here’s something I ran across accidentally today. In a working paper released a few months ago, Raj Chetty and Nathaniel Hendren try to estimate the effect on low-income children of moving to better neighborhoods. In particular, which 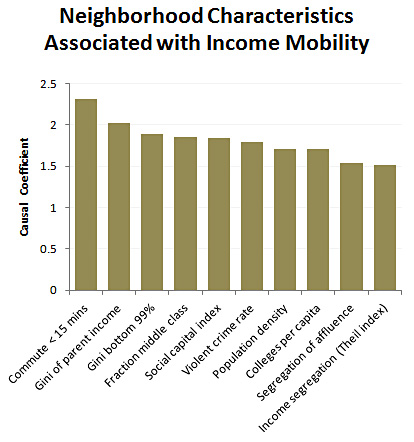 All the usual suspects have high correlations: segregation, social capital, crime, income inequality, population density, etc. But the very highest correlation—by quite a bit—is for commuting time. Moving to a neighborhood where most people commute less than 15 minutes has a big impact:

Twenty years of exposure to a [commuting zone] with a 1 standard deviation higher fraction of people with commute times less than 15 minutes increases a child’s income by [7%]….These correlations with commute times are unlikely the direct effect of being closer to jobs….It is likely some characteristic of places correlated with commute times that drives the underlying pattern.

In other words, this doesn’t mean that if mom or dad gets a job closer to home, junior will enjoy a higher income when he grows up. It means that if the family moves to a neighborhood that’s close to where its residents work, junior’s income will benefit.

This seems a little unlikely, though it’s not impossible to imagine that neighborhoods where parents are home more of the time have a beneficial effect on kids. Still, the authors are most likely right: commute time is probably standing in for something else. Perhaps neighborhoods that are close to lots of jobs have certain characteristics that are good for kids, and short commutes are just an accidental bonus.

Either way, this sure seems interesting enough to follow up on. Is it really commute time that matters? If not, what is it a proxy for?

NOTE: The chart shows the effect on boys whose parents have incomes in the bottom quarter. The effect is pretty much the same for girls.