As you surely know by now, the latest round of Republican campaign cretinism came a few days ago when Donald Trump mocked a reporter with chronic arthrogryposis, which restricts the movement of his arms 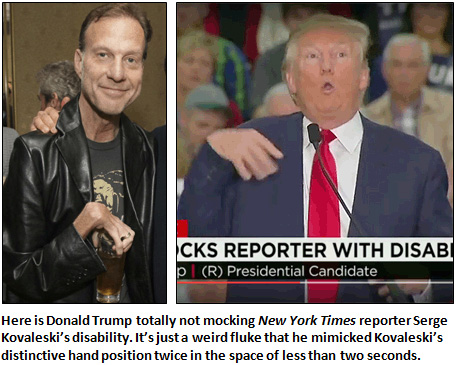 and hands. Today Josh Marshall posted a brief but spot-on explanation of why Trump is not only not apologizing for this, but going on the offensive over it:

If you’re surprised that Donald Trump isn’t apologizing for mocking a reporter’s physical handicap and doesn’t seem to be paying any price for it, let me help. Half of rightwing politics is about resentment over perceived demands for apologies. Apologies about race, about fear of Muslims, about not being politically correct, about not liking the losers and the moochers, about Christmas, about being being white. This will hurt Trump about as much as going after Megyn Kelly did. Remember: his biggest applause line at the first GOP debate came for calling Rosie O’Donnell a fat slob.

About half the juice of far-right politics in this country is rooted in refusing to apologize when ‘elites’ or right thinking people reprove you for not being ‘politically correct.’

The thing about Trump is that he talks as if he’s sitting at home with a couple of his buddies. In settings like that, lots of us make casually derisive remarks that we wouldn’t make in public.1 But Trump does say it in public, and to his supporters that’s great. He’s finally saying the stuff that they’re quite sure everybody says in private.

The giveaway was this bit from Trump about Kovaleski: “He should stop using his disability to grandstand and get back to reporting for a paper that is rapidly going down the tubes.” That’s what Trump’s fans think is going on all over the place. The blacks, the Hispanics, the disabled, the immigrants, the poor: sure, they’ve got problems, but who doesn’t? They’re just making a big deal out of it in order to gain sympathy and government bennies that the rest of us have to pay for. And the worst part is that you know what everyone else is already thinking about this claptrap, but you get in trouble if you say it. Republican candidates have tapped this vein of resentment for years, but usually in coded ways that won’t get them in too much hot water. Trump just dives in. Other politicians may have paved the way, but it’s Trump who’s finally figured out how to turn it into electoral gold.

1Yes, I do it too, and no, for obvious reasons I’m not going to tell you what my sore spots are.