Poverty data generally comes from the Census Bureau, which bases its analysis on the Current Population Survey. But do poor people under-report or underestimate the value of the programs they participate in? They might, and it seems to me it’s pretty easy to figure this out. Add up the value of, say, all SNAP reports from the CPS, and then compare it to the actual amount of SNAP money the government sends out. If it doesn’t match pretty closely, then the survey is off.

A pair of researchers recently took a look at how effective anti-poverty programs are, but they never mention this. I guess it must be harder than I think. Instead, they compare CPS data to detailed administrative data from the state of New York that’s known to be highly accurate. They did this for four programs: TANF (basic welfare), SNAP (food stamps), subsidized housing, and general assistance. It turns out that poor people underestimate their annual benefits by about $1,500. This produces two conclusions. First, the authors believe that survey data in general is becoming less reliable over time. Second, they believe that anti-poverty programs lift a lot more people out of poverty than we think.

The chart below shows their basic conclusion. The overall poverty rate, for example, is 13.65 percent. Using conventional CPS data, that goes down to 10.9 percent after benefits. Using the higher-quality data, however, it appears that anti-poverty programs actually reduce the poverty rate to 8.4 percent. The effect is even more dramatic in households headed by single mothers. Apparently the war on poverty is going better than we thought. 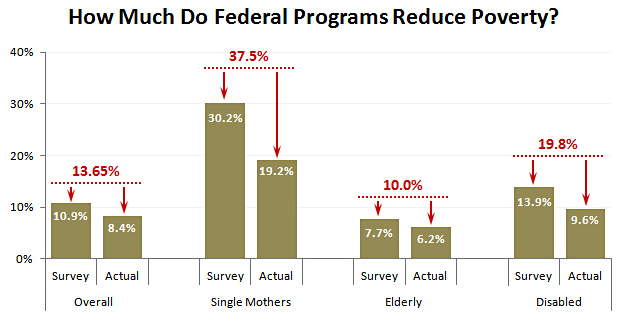