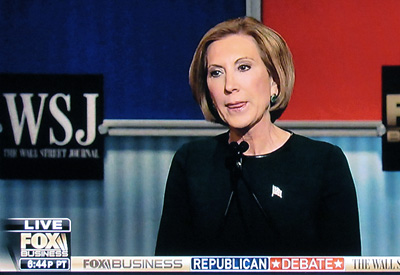 This was my favorite moment of the debate last night:

BAKER: In seven years under President Obama, the U.S. has added an average of 107,000 jobs a month. Under President Clinton, the economy added about 240,000 jobs a month. Under George W. Bush, it was only 13,000 a month. If you win the nomination, you’ll probably be facing a Democrat named Clinton. How are you going to respond to the claim that Democratic presidents are better at creating jobs than Republicans?

FIORINA: [Looks like a deer in headlights.] Well, first of all, I must say as I think about that question, I think about a woman I met the other day. [blah blah blah, playing for time, hoping everyone will forget the question.] Yes, problems have gotten much worse under Democrats.

This is a brand new technique. Normally, when candidates are faced with a tough question, they ignore it and answer a different question. Fiorina tried to do this at first. But then she decided on a new tack: answer the exact opposite question. Baker cites numbers to show that Democrats are great at job creation, so Fiorina acknowledges that yes, he’s right, things have gotten much worse under Democrats.

Will this bold ploy catch on? Baker certainly didn’t challenge her on it. I expect to see other candidates give this a shot in future debates.