We all know that Ben Carson has some wacky ideas. We also know that he has some pretty strange views of history. And that a lot of his policy proposals make no sense at all. But he’s long had a pretty good reputation for being truthful. Crazy but honest, that’s Ben. Except that it’s now starting to look like he has some real problems with being honest in his personal life. For example:

Then: A guy named Bill asked Carson if “it’s true that I was offered a slot at West Point after high school.” Carson replied, “Bill, that is true. I was the highest student ROTC member in Detroit and was thrilled to get an offer from West Point.”

Now: He never got an offer from West Point. Apparently some people told him he could probably get in with his ROTC record, but he never even applied.

Then: “Three years ago I had an endowed chair bestowed upon me….I’m proud to say that part of that $2.5 million came from Mannatech.”

Now: He now denies that any of the money for the endowed chair actually came from Mannatech. “He simply got things mixed up,” a campaign spokesman said. That seems a little unlikely 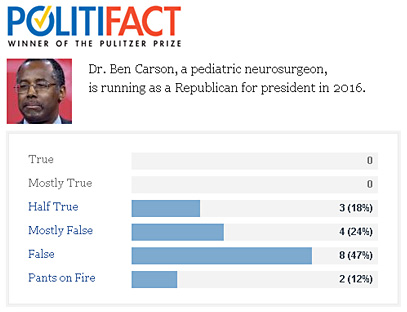 since Carson made this claim in a prepared speech given at a Mannatech sales conference.

Then: “Several sections of potential Republican presidential candidate Dr. Ben Carson’s 2012 book America the Beautiful were plagiarized from various sources, BuzzFeed News has found….In one instance, Carson cites wholesale from an old website that has been online since at least 2002, Socialismsucks.net.”

Now: “I attempted to appropriately cite and acknowledge all sources in America the Beautiful, but inadvertently missed some.” This is such a common excuse among plagiarists that it’s practically become a joke.

Then: “There was a time when I was, you know, very volatile….As a teenager. I would go after people with rocks, and bricks, and baseball bats, and hammers. And, of course, many people know the story when I was 14 and I tried to stab someone.”

Now: CNN interviewed nine of Carson’s childhood friends. None of them could recall any violent incidents. Carson’s response: “This is a bunch of lies, that is what it is.”

Drones on the Border

Then: “I’m suggesting we do what we need to do to secure the border whatever that is….You look at some of these caves and things out there one drone strike, boom, and they’d gone.”

Now: “It was quite clear what I was talking about. That drones are excellent for surveillance.”

The Psychology Test at Yale

Then: “The day before I’d been informed that the final examination papers in a psychology class, Perceptions 301, ‘were inadvertently burned’….So I, with about 150 other students, went to the designated auditorium for the repeat exam….[The questions] were incredibly difficult….Soon half the class was gone, and the exodus continued. Not one person turned in the examination before leaving.

“….Suddenly the door of the classroom opened….The professor came toward me. With her was a photographer for the Yale Daily News who paused and snapped my picture. ‘What’s going on?’ I asked. ‘A hoax,’ the teacher said. ‘We wanted to see who was the most honest student in the class.’ She smiled again. ‘And that’s you.’ “

Now: The Wall Street Journal reports that “no photo identifying Mr. Carson as a student ever ran, according to the Yale Daily News archives, and no stories from that era mention a class called Perceptions 301. Yale Librarian Claryn Spies said Friday there was no psychology course by that name or class number during any of Mr. Carson’s years at Yale.”

These aren’t policy issues. They’re examples of Carson saying things that he later denies or that turn out to be untrue. If he does it as often as this list suggests, he’s probably done it a few more times as well. We just don’t know it yet. Now that the press is onto this, however, I’ll bet we’re going to come across a few more before long. Anyone who continues to support Carson had better be prepared for the worst.