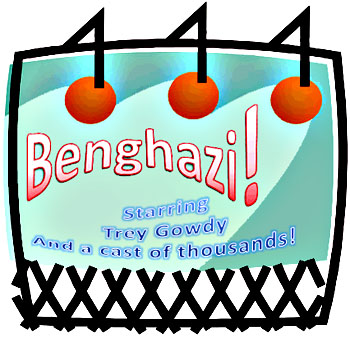 Congressional hearings are partisan by nature. In the abstract, there’s nothing wrong with that: the strongest oversight is often performed by political opponents who are motivated to find problems.

So on Thursday, when Republicans on the Benghazi committee peppered Hillary Clinton with questions about why she didn’t respond to requests for more security in the months before the 2012 attacks, that was fair game. We can argue about whether they harped on it too much or spent too much time grandstanding, but basically there’s nothing wrong with it. Like it or not, grandstanding is part of what politicians do.

But Republicans insist that the committee is solely about Benghazi and a search for the truth, not about attacking Hillary Clinton. So when the questioning and the grandstanding veer off into areas that clearly have no motivation except to smear Clinton, it gives the game away.

Every single Republican on the committee went there on Thursday. What’s especially remarkable about this is that they had just endured weeks of criticism on exactly this point. They had a strong incentive to stay tightly focused on Benghazi and how to prevent future attacks on diplomatic facilities. But they didn’t. They couldn’t help themselves. And with that, they exposed what they really think this committee is about.

Here are each Republican member’s greatest hits: the obsessions and lines of questioning that unmask their true purpose. Enjoy.

CHAIRMAN TREY GOWDY was desperate to tie Clinton to her longtime friend and confidant Sidney Blumenthal. Why? Blumenthal is a Clinton loyalist who was a particular thorn in the GOP’s side during the scandal 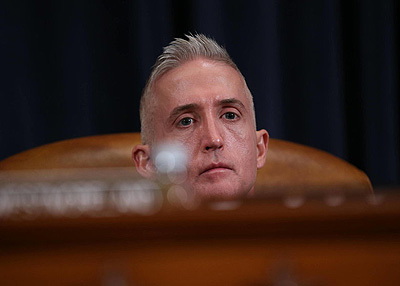 hunts of the 90s. So tying Hillary to Blumenthal offered obvious political benefits, despite the fact that he plainly had nothing to do with either diplomatic security in Benghazi or the attacks themselves:

Madam Secretary, regardless of where he ranked in the order of advisers, it is undisputed that a significant number of your e-mails were to or from a Sidney Blumenthal….He worked for the Clinton Foundation….He worked for Media Matters….He worked for Correct the Record.

….And Madam Secretary, he had unfettered access to you….I have this contrast in my mind. A ambassador newly in place. It’s a day after an attack on our facility. Your deputy chief of staff is sending him an e-mail from Sidney Blumenthal, asking him to take time to read and react to it. And then to the best of my recollection, that’s forwarded to you.

So help us understand how Sidney Blumenthal had that kind of access to you, Madame Secretary, but the ambassador did not.

MICHAEL POMPEO also jumped on the Sidney Blumenthal bandwagon. For obvious reasons, Blumenthal used Clinton’s personal email address to contact her, while security professionals in the State Department used official channels. Email records simply tell us nothing about who Clinton did and didn’t talk to. But Pompeo was nonetheless determined to accuse Clinton of caring more about her shady friend than she did about security in Benghazi:

Madam Secretary, Mr. Blumenthal wrote you 150 e-mails. It appears from the materials we’ve read that all of those reached your desk. Can you tell us why security requests from your professionals, the men that you just testified — and which I agree, are incredibly professional, incredibly capable people, trained in the art of keeping us all safe — none of those made it to you.

But a man who was a friend of yours, who had never been to Libya, didn’t know much about it, at least that was his testimony, didn’t know much about it, every one of those reports that he sent on to you that had to do with situations on the ground in Libya, those made it to your desk. You asked for more of them. You read them. You corresponded with him. And yet the folks that worked for you didn’t have the same courtesy.

SUSAN BROOKS spent nearly an entire round of questions asking Clinton why there were so few emails about Libya in 2012. Clinton explained over and over that she conducted very little business via email, but Brooks didn’t care. She had spent a lot of 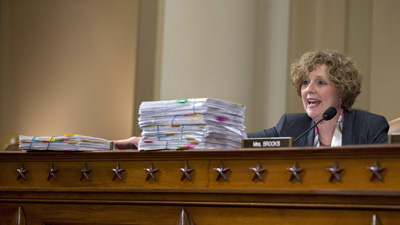 time putting together what she thought was a devastating personal attack on Clinton’s priorities and personal character:

This pile represents the e-mails that you sent or received about Libya in 2011, from February through December of 2011. [Points to pile of paper.] This pile represents the e-mails you sent or received from early 2012 until the day of the attack. [Points to another pile of paper.] There are 795 e-mails in this pile. We’ve counted them. There’s 67 e-mails in this pile in 2012. And I’m troubled by what I see here.

….When I look at this pile in 2012, I only see a handful of e-mails to you from your senior staff about Benghazi….And I can only conclude by your own records that there was a lack of interest in Libya in 2012.

JIM JORDAN spent an entire round of questioning obsessing about why, in the first few days after the Benghazi attacks, Clinton and others in the Obama administration mentioned a scurrilous anti-Muslim YouTube video as one of the motivations for the attack. The short answer is (a) it was mentioned only briefly during the first week after the attacks, and (b) it really was one of the motivations. But Jordan didn’t care. This was his entree to outline his theory of Hillary Clinton as a serial liar:

If there’s no evidence for a video-inspired protest, then where did the false narrative start? It started with you, Madam Secretary.

PETER ROSKAM had prepared a long line of questioning that turned out to be a tortured attempt to somehow get Hillary to concede that there was such as thing as a “Clinton Doctrine.” She never did, but Roskam soldiered on anyway. 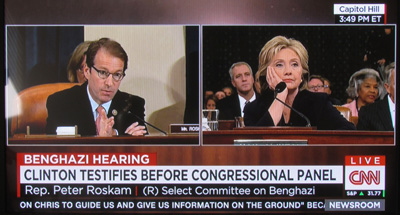 He’d spent a lot of time on this, and he just had to get it off his chest:

Two months before the end of the Gadhafi regime and you’re already planning on how to make your statement dramatic to maximize political gains, isn’t that right?….Let me tell you what I think the Clinton doctrine is. I think it’s where an opportunity is seized to turn progress in Libya into a political win for Hillary Rodham Clinton, and at the precise moment when things look good, take a victory lap, like on all the Sunday shows three times that year before Gadhafi was killed. And then turn your attention to other things.

MARTHA ROBY was bound and determined to string out a long line of obviously immaterial questions designed solely to establish what a calculating, uncaring person Hillary Clinton is. She started by insisting that Clinton help her individually name each and every person who was still at work when Clinton left for home on the evening of 9/11/2012. Then she moved on to whether Clinton had personally spoken to the survivors of the Benghazi attacks:

ROBY: Your surviving agents were evacuated to Tripoli the morning of the 12th. Did you talk to the survivors either that night or once they arrived in Tripoli?

CLINTON: We did not speak to them directly. We obviously made arrangements for them to be safely evacuated, and then to be transported to a hospital facility that we thought was safe from any potential attacks.

ROBY: Did you talk to them the next day?

ROBY: Did you talk to them later that week?

ROBY: Did you talk to them when they first got back to the United States?

CLINTON: I did not talk to them until they had had an opportunity to be debriefed and to provide information that would help us understand what happened; help the intelligence community and help the FBI as they were trying to build their case.

ROBY: How would it have harmed the case that they were trying to build for you, secretary of state, just to check in on their well being?

CLINTON: I did check on their well being.

CLINTON: Well, I did personally talk with the people who were taking care of them, transporting them….

CLINTON: I talked to the survivors when they came back to the United States. And one who was for many months in Walter Reed on the telephone.

….ROBY: Your people were on the ground in harm’s way and you never had a conversation with them….I think, Mr. Chairman, there’s two messages here. I think the first message is the message that you sent to your personnel the night of the attack that you went home. They all stayed there and you didn’t go back until the next morning.

I think the second message that is sent is that you used the FBI’s inquiry as an excuse not to check in with your agents who were on the ground who survived that horrible night just to ask them how they were.

LYNN WESTMORELAND thought it was damn suspicious that other Secretaries of State had also used private email accounts when they were in office. After all, that conveniently helps Hillary make the case that she wasn’t doing anything very unusual. None of this has anything to do with Benghazi, but Westmoreland really, really wanted to offer up his home-brew theory about how that happened:

So I tell you what let’s do. Let’s go back and ask Madeleine Albright, who was Secretary of State in 1997, that never even had an e-mail account. Or let’s go back and ask, you know, Colin Powell, Condoleezza Rice, and me to find all this information. I’m just telling you, it smells — it doesn’t smell right.