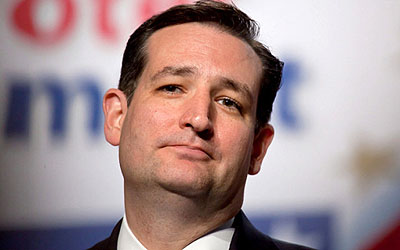 Ed Kilgore would like you to read these two quotes from Ted Cruz together. The first one is a reaction to the Democratic debate (which Cruz admits he didn’t actually watch):

And this is from a fundraising email sent out earlier this year:

The 2nd Amendment…is a Constitutional right to protect your children, your family, your home, our lives, and to serve as the ultimate check against governmental tyranny — for the protection of liberty.

Kilgore says it’s a mistake to dismiss the first quote as just Ted being Ted. “When a guy like Cruz starts tossing around words like ‘tyrant’ and ‘jackboot’ and ‘destroy the country’ and ‘strip your and my individual liberties,’ isn’t it possible, perhaps even likely, that at least a few of his supporters might think he’s signaling that the time is near to get out the shooting irons and start executing the Tyrant’s agents?”

This business of the 2nd Amendment being the ultimate bulwark against tyranny has been around for a long time, but it sure has gotten louder and more mainstream these days. And the target—liberals in general and Barack Obama very much in particular—sure has gotten more explicit. Maybe it’s time to cool it, folks.