When the Education Department releases its biennial scorecard of reading and math scores for all 50 states this week, Florida and Texas are likely to look pretty mediocre. In 2013, the last time that scores were released, Florida ranked 30th on the tests, which are given to fourth and eighth graders, and Texas ranked 32nd.

But these raw scores, which receive widespread attention, almost certainly present a misleading picture — and one that gives short shrift to both Florida and Texas. In truth, schools in both states appear to be well above average at teaching their students math and reading. Florida and Texas look worse than they deserve to because they’re educating a more disadvantaged group of students than most states are.

This conclusion is based on a new report by the Urban Institute. That’s fine, but we pretty much knew this already. Texas has large black and Hispanic populations, and they tend to do worse on academic tests than whites—which makes the overall scores for Texas look weak. But if you head over to the NAEP site and look at scores for each state disaggregated by race you can get the real story in about five minutes. The chart below is for 8th grade math, but you can do the same thing for any other test. It’s sorted by black test scores, and as you can see, Texas is 3rd in the nation. (Florida is 15th.) It’s also 3rd in Hispanic scores, and 5th in white scores.

The Urban Institute controls for other factors besides race (poverty, native language, special ed), and that makes Florida look even better than the disaggregated NAEP scores suggest. But Texas looks good no matter what. If education reporters would pay attention to this stuff, it might not come as such a big surprise. Like it or not, Texas has been scoring pretty well for quite a while. 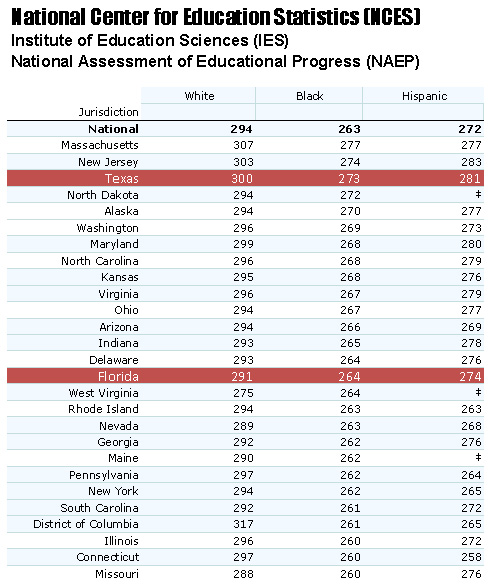