OK, that’s enough about the poor. Let’s move on to stuff that upper-middle-class folks care about. Consumer Reports has been raving about Tesla electric cars for a while—so good it broke their rating system, scoring 103 out of 100!—and I’ve been wondering 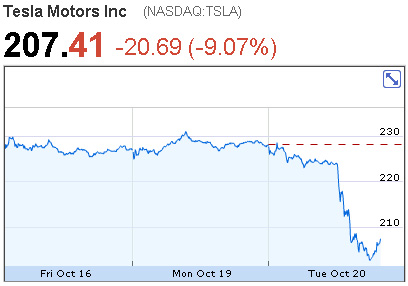 all that time what would happen after a couple of years when they started getting reliability data. Today I found out:

Consumer Reports withdrew its recommendation for the Tesla Model S — a car the magazine previously raved about — because of poor reliability for the sporty electric sedan….Consumer Reports surveyed 1,400 Model S owners “who chronicled an array of detailed and complicated maladies” with the drivetrain, power equipment, charging equipment and giant iPad-like center console. They also complained about body and sunroof squeaks, rattles and leaks.

“As the older vehicles are getting up on miles, we are seeing some where the electric motor needs to be replaced and the onboard charging system won’t charge the battery,” said Jake Fisher, Consumer Reports’ director of automotive testing. “On the newer vehicles, we are seeing problems such as the sunroof not operating properly. Door handles continue to be an issue.”

Ouch. Tesla stock, unsurprisingly, took a big tumble. But here’s an interesting question for you. I figure that there are probably fewer owners of the Tesla S who are moderately annoyed than there are people who are completely panicked because they rely on RushCard for all their money and can’t get to it. However, the former are rich and the latter are poor. Which story do you think will get faster and more sustained attention?