I want to highlight something I wrote over the weekend that might have gotten buried a bit. As you may know, HHS recently announced that Obamacare would enroll 10 million people in the exchanges next year, compared to enrollment of 9 million this year. That makes it sound like Obamacare has stalled and will come nowhere near to hitting its early projections.

This probably isn’t true, but you can easily go very far down a rabbit hole trying to figure out who’s insured via what and how that compares to early projections. I did a bit of that in Saturday’s post, but I think there’s a much easier way of tracking Obamacare’s success or failure: just look at the total number of uninsured. That’s 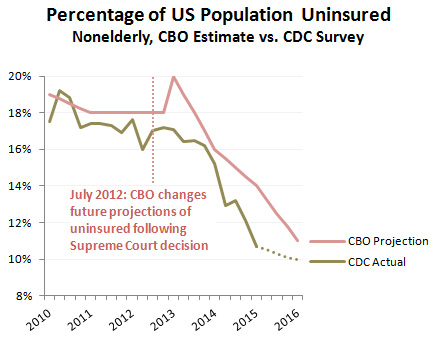 what matters, not whether they’re covered by Medicaid or exchanges or employers or something else.

So let’s review the tape. In 2010, just after Obamacare passed, CBO estimated that the uninsured rate would hit 8 percent by 2016. This was based on the original law, but in 2012 the Supreme Court made Medicaid expansion voluntary and most red states opted out. In July CBO updated its projections to account for this, increasing its estimate of uninsured by three percentage points. The next CBO estimate thus projected that the uninsured rate would be 11 percent by 2016. So how does that compare to reality? In its most recent survey, the CDC estimates that in the first quarter of 2015 the actual number of uninsured clocked in at 10.7 percent, and that’s likely to decline to about 10 percent or so by the end of 2016.

In other words, once you clear away all the underbrush it looks like Obamacare is meeting or beating its goals. Some of this might be due to an improving economy, but who cares? If the economy is doing well enough that more people are getting employer coverage and fewer are being forced onto the exchanges, that’s a good thing, not a knock on Obamacare.