“This is something we should politicize,” President Obama said last week after the gun massacre in Oregon. “It is relevant to our common life together, to the body politic.” Jonah Goldberg is annoyed that Obama said this even though he’s routinely spoken out against politicizing issues in the past. “He’s not about to try building consensus on gun violence among people of good faith,” Goldberg says. Then this:

Obama’s comments on Thursday highlighted the problem with his approach to politics. He would rather go for everything he wants and get nothing, but keep the political issue, than make progress on common ground.

Virtually none of the proposals on his gun-control wish list — more comprehensive federal background checks, closing the gun show “loophole,” etc. — would help bring down the homicide rate….Typically, mass killers don’t buy guns at gun shows. And a CNN analysis found that a comprehensive background check system wouldn’t have prevented any of the “routine” killing sprees Obama referred to, save one.

….After the Sandy Hook slaughter, there was a bipartisan consensus that more needed to be done on the mental health side. But Obama, fresh off reelection, rejected a piecemeal approach, largely 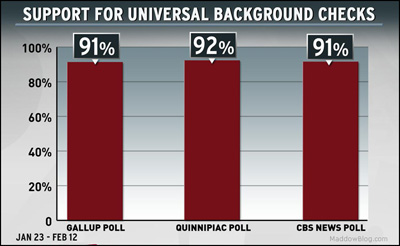 preferring to go for a “comprehensive” solution. He ended up with nothing at all.

Um, what? Shortly after Sandy Hook, Joe Biden released the final report of his task force on gun violence. It contained recommendations in four areas, one of which was increased access to mental health services. Several bipartisan bills that targeted mental health did indeed get introduced, and I believe Obama supported all of them. So why didn’t they pass? That’s always hard to say, but the best guess is that it’s because they all cost money, and Republicans were unwilling to vote for increased spending. So they died. Obama’s preference for a “comprehensive” approach had nothing to do with it.

Beyond that, sure, Obama wanted comprehensive legislation. But in the end, this got whittled down to one thing: a bipartisan bill mandating universal background checks. It was watered down repeatedly, and was about as weak as possible by the time it finally got a vote. Despite massive public support, even from gun owners, it failed after an enormous effort to reach out to all those people of good faith Goldberg talks about. I think you can guess who voted against it.1

1It was 41 Republicans and 5 Democrats, in case you’ve forgotten.