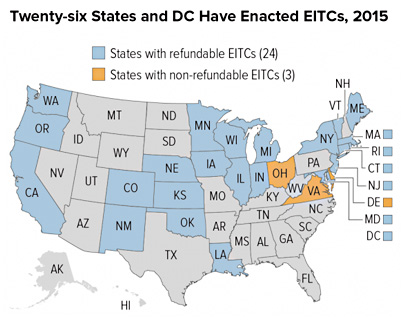 When you add up the minimum wage and the Earned Income Tax Credit, Brad DeLong thinks it should add up to a living wage:

That is all very true.

So raise the minimum wage, and then bargain back to a lower minimum wage and a higher income tax credit if it turns out that there are significant disemployment affects.

Well, yes, that would be fine except that the same people who refuse to increase the EITC are the same ones who refuse to raise the minimum wage. We’re no more likely to get a $15 (or $12 or $13 or $14) minimum wage than we are to get a more generous EITC. Ditto for wage subsidies, which are popular in some conservative circles. The excuses may vary depending on the circumstances, but they will always add up to No.

Perhaps a better bet is to focus on the state level. Plenty of states have an EITC that piggybacks on the federal EITC, and that means there are plenty of laboratories of democracy where we could try different combinations of EITC and minimum wage to see what works best. Who knows? Maybe a few states could even be talked into trying out wage subsidies.