A few weeks ago, Hillary Clinton aide Cheryl Mills testified before the Benghazi committee. Apparently several Republican members of the committee talked to reporters about this. Here is Politico on September 3:

Raising alarms on the right, Mills, Clinton’s former chief of staff at the State Department, also told the House Select Committee on Benghazi that she reviewed and made suggestions for changes to the government’s official, final report on what happened in Benghazi, according to a separate, GOP source familiar with what she said.

The source said it “call[s] into question the ‘independence’” of the report’s conclusions….The report was supposed to be independent from state officials that may be involved, and the GOP argues top officials should not have had input, long questioning how independent the findings were. 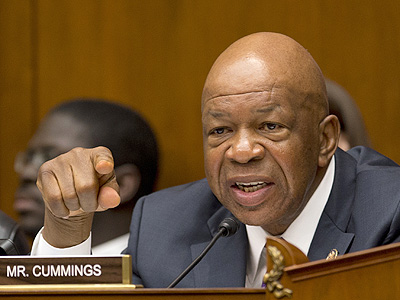 Today, in the wake of Rep. Kevin McCarthy’s boasting about how the Benghazi committee had been a great tool to bring down Hillary, Elijah Cummings, the ranking Democrat on the committee, lobbed a shot across the bow of the Republican chairman:

Republicans began leaking inaccurate information about Ms. Mills’ interview within minutes after your public declaration that it should be treated as classified….During her interview, Ms. Mills corroborated both Ambassador Pickering’s testimony and the Inspector General’s findings:

Q: Did you ever, in that process, attempt to exert influence over the direction of the ARB’s investigation?

Q: Did you ever try to—did Secretary Clinton ever try to exert influence over the direction of their investigation?

Ms. Mills also explained that the Secretary’s objective in selecting members of the ARB was, “could they be people who could give hard medicine if that was what was needed. And I felt like, in the end, that team was a team that would speak whatever were their truths or observations to the Department so that we could learn whatever lessons we needed to learn.”

….We believe it is time to begin releasing the transcripts of interviews conducted by the Select Committee in order to correct the public record after numerous inaccurate Republican leaks….Please notify us within five days if you believe any information in the full transcript should be withheld from the American people.

No response yet from committee chairman Trey Gowdy, who has insisted all along that the Benghazi investigation is purely an enlightened search for the truth with no trace of partisan overtones. But I’m all in favor of holding all of the committee’s hearings in public with occasional exceptions for genuinely classified testimony. Stay tuned.