Twenty years ago, gun control all but disappeared as a Democratic issue. There were still a few halfhearted attempts to ban assault weapons or eliminate the “gun show loophole,” but basically Dems decided that gun control was a losing effort. The NRA was too strong and guns were too popular. Better to just lie low and focus on other stuff.

But not anymore. At Tuesday’s debate, Democratic presidential candidates were tripping over each other to insist that they were tougher on guns than anyone else on the stage. Bernie Sanders practically had to apologize 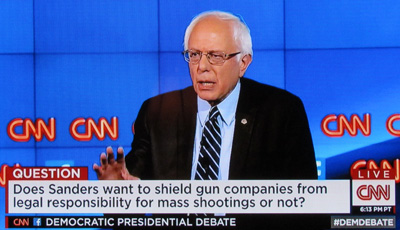 for only getting a D- grade from the NRA. Why the change? I think Steve Benen gets it right. The “lie low” strategy didn’t work, so there’s not much point in it anymore:

It’s slowly dawning on Dems that as the NRA becomes more extreme, there’s no placating the group….Just ask former Sen. Mark Pryor (D-Ark.), who eagerly tried to keep the NRA on his side, only to find during his re-election campaign that the NRA targeted him with a vengeance anyway.

….The group’s message used to effectively be, “Play ball with us and we’ll leave you alone.” That’s transformed into, “We’re coming after you, whether you try to work with us or not.” With incentives like these, Democrats might as well speak their minds, since condemnations from the right are inevitable either way.

The polarization of American politics is making this common. Benjamin Netanyahu has essentially turned the Israeli government into an arm of the Republican Party. The NRA goes after Democrats regardless of whether or not they support gun rights. Abortion groups target Republicans.

This trend is likely to get even more pronounced as America continues its journey toward de facto parliamentary government. For the NRA, ensuring that Republicans control Congress is probably a more reliable strategy than playing ball with the shrinking number of Democrats who support gun rights. With a Democratic Congress, they’re probably OK—as long as they don’t lose the votes of a few of their Dem supporters because of a gun massacre or something. But with a Republican Congress, they’re guaranteed to be OK. They’re unlikely to lose votes for any reason, and even if they do the party leadership will prevent any anti-gun bills from reaching the floor.

Obviously there are dangers to this strategy. When Democrats are in power, they no longer have any incentive to support the NRA at all, which means they might as well go ahead and pass gun control laws if they can. Likewise, Republicans have little incentive to be moderate on abortion, so when they’re in power they might as well go to town on anti-abortion laws. Which is exactly what’s happening at the state level.