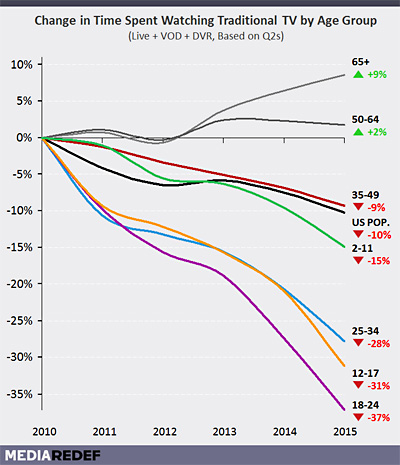 I suppose this isn’t exactly breaking news, but young people sure are abandoning traditional television in a hurry. Liam Boluk reads the eulogy:

Across all audience segments under 50, television engagement is declining rapidly…. This time is not simply evaporating. Instead, it’s moving to services such as Netflix (each of the company’s 43M US accounts watches more than 2 hours a day), Twitch (15M American viewers watching 30 minutes a day), YouTube (163M watching 35 minutes a day) and scores of other low cost (if not free) digital-first brands and services.

No television network can weather the loss of their younger audiences….Skinny bundles, adjusted affiliate fees, re-rationalized programming strategies, lower costs, declining Pay TV penetration. These can all be managed practically. But without a way of re-engaging youth audiences, all networks are on long-term life support. To thrive, they need to invest in new digital properties, create new distribution models and partnerships and invest in radically different content forms.

Traditional TV viewing among teenagers and 20-somethings has gone off a cliff since 2010. Oddly, though, old folks are watching more TV. It’s easy to understand why TV viewing among seniors might be flat—they’re not interested in YouTube and Netflix and all the other stuff the kids these day are into—but why would it be going up? Have traditional networks well and truly given up on younger viewers and are therefore programming more content that appeals to the Geritol crowd?

I’m no media analyst, so I have no great insights into all this. I just thought it was interesting to see how dramatic the decline has been among younger viewers, despite being told relentlessly that we’re in a second golden age of TV. About once a week I think I read an article telling me that some show I’ve never heard of is probably the best drama on television today—maybe of all time. I guess the kids aren’t listening.