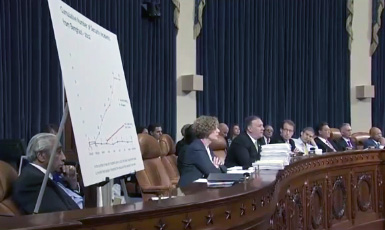 I’ve been trying to dredge up something interesting from the Benghazi hearing today, but it’s tough sledding. Kansas Rep. Mike Pompeo went the Ross Perot route, putting up a chart showing (he said) that there had been tons of requests for more security in Libya and none of them were approved. Why? WHY? Clinton patiently explained that security professionals made decisions about security requests, but this cut no ice with Pompeo. He was apparently outraged that we hadn’t shipped in a couple of brigades of Marines the moment someone reported that things in Libya were getting dicey.

Ohio Rep. Jim Jordan then went on a strange rant about the video. You know: THE VIDEO. In very loud tones, Jordan tried to accuse Clinton of lying to the American public because the State Department released a statement on the night of the attacks that said this:

Some have sought to justify this vicious behavior as a response to inflammatory material posted on the Internet.

That’s just a flat-out statement that the video caused the attack! Why would she say that? She knew that terrorists were responsible! Of course, the whole paragraph says this:

Some have sought to justify this vicious behavior as a response to inflammatory material posted on the Internet. The United States deplores any intentional effort to denigrate the religious beliefs of others. Our commitment to religious tolerance goes back to the very beginning of our nation. But let me be clear: There is never any justification for violent acts of this kind.

Jeebus. Haven’t we been through all this before? The wording of the State Department statement is obvious: not that we blame the video, but that others have “sought” to blame the video. This is so obvious that it’s genuinely unclear what Jordan thought he was accomplishing with this weird line of questioning.

Right now, chairman Trey Gowdy is engaging in a long Sidney Blumenthal fest. It goes without saying that this has nothing to do with the Benghazi attacks or our response to it. It will not help us understand security at the Benghazi mission or why we didn’t know an attack was imminent. It’s just an attempt to undermine Clinton’s reputation by linking her with Blumenthal. I think everyone watching this show understands that.

But there’s more! If Republicans are so fascinated with Blumenthal, Democrats want the transcript of his testimony released. Gowdy, of course, refuses. But he does say this: “I’ll tell you what, if you think you’ve heard about Sidney Blumenthal so far, wait until the next round.”

I can’t wait. And that’s a wrap on the first round of questioning.