Apparently John Boehner has done his bit to clean the ol’ congressional barn before decamping Capitol Hill for West Chester Township and a golf-filled retirement. (Or a condo near K Street. No telling which, really.) He’s reached a budget deal with the president that increases social spending and saves the Social Security disability fund (yay Democrats!), and increases defense spending, tightens penalties for defrauding the disability program, and cuts payments to Medicare providers (yay Republicans!). 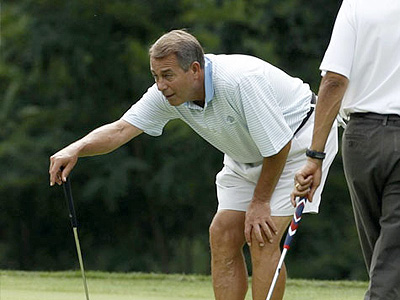 Everyone gets a break from government shutdowns and debt ceiling threats (yay ordinary citizens!).

But what about those entitlement cuts? Should liberals be worried? Greg Sargent reports that we shouldn’t be:

On Medicare and Social Security: Nancy Altman, the president of Social Security Works, a group that strenuously opposes benefits cuts and argues for their expansion, tells me that the deal “doesn’t actually cut benefits or really hurt beneficiaries who aren’t gaming the system.”

Altman says the Medicare cuts are all on the provider side, which could harm beneficiaries at some point, but it’s not a major concern. “On the Medicare side, they limited their cuts to far in the future, and to providers,” Altman says. “There’s time to correct that.”

On the change to Social Security, Altman says: “They stiffened the penalties for fraud, they extended nationwide efforts to make sure that payments are accurate and they closed a loophole in which people were gaming the system. They didn’t change eligibility requirements or reduce the level of benefits.”

So I guess that’s not bad. The defense side of the budget actually ended up getting a bigger increase than the non-defense side, but I suppose we can all live with that. Gotta kill us some Taliban terrorists, after all. And ISIS terrorists. And Assad terrorists.

So now we can all get back to the business of the day: reporting on whatever loony thing Ben Carson or Donald Trump said. I think they’re arguing right now about whether Ben Carson wants to abolish Medicare and turn old people into soylent green. Or something. I might have that wrong. I’ll check into it later.