Ben Carson said Thursday that Adolf Hitler’s mass murder of Jews “would have been greatly diminished” if German citizens had not been disarmed by the Nazi regime…”But just clarify, if there had been no gun control laws in Europe at that time, would 6 million Jews have been slaughtered?” Blitzer asked.

“I think the likelihood of Hitler being able to accomplish his goals would have been greatly diminished if the people had been armed,” Carson said…”I’m telling you that there is a reason that these dictatorial people take the guns first.”

This got me curious: Did Hitler take away everyone’s guns? As you can imagine, I know zilch about the history of gun control in Germany, so I surfed 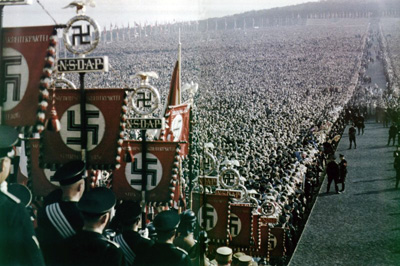 over to Wikipedia, the source of all knowledge, for a quick refresher course. Here’s what they say:

Now, Hitler did effectively ban Jews from owning guns in 1938. However, this is highly unlikely to have affected the fate of the Jews even slightly. The Nazis were considerably better armed and organized, and if Jews had taken to shooting them it would have accomplished nothing except giving Joseph Goebbels some terrific propaganda opportunities. The 1943 Warsaw Ghetto Uprising is a good example of this: Jews fought back, and the result was a few dead Germans and 13,000 dead Jews.

The bottom line is familiar to anyone with even a passing knowledge of history: Hitler was popular. He didn’t need to take away anyone’s guns. Whatever you think about gun control, using Hitler to defend your position is a bad idea.