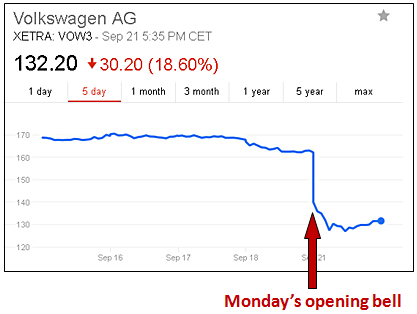 Guess what happens when you concoct a contemptible scheme to secretly blow off emission rules on your cars—and then it suddenly becomes not so secret? Answer: your respected multinational corporation loses about $20 billion of value over the course of a few minutes. Your stock gets downgraded by pretty much every analyst on the planet. And the folks who put together the Dow Jones Sustainability Index start suggesting that maybe VW isn’t exactly a poster child for sustainability anymore.

By the way, it turns out that VW’s deception was actually discovered a year ago, but they doggedly denied any wrongdoing:

For nearly a year, Volkswagen officials told the Environmental Protection Agency that discrepancies between the formal air-quality tests on its diesel cars and the much higher pollution levels out on the road were the result of technical errors, not a deliberate attempt to deceive Washington officials.

….The company was evidently concerned that actually meeting the federal emissions standards would degrade the power of the engines, which it marketed as comparable in performance to gasoline engines. Meeting the standard would also undercut the fuel efficiency that is one of the main selling points of diesels.

Volkswagen finally fessed up only after the EPA said it planned to withhold approval for the carmaker’s new 2016 models. Until then, it was just deny, deny, deny.