As we all know, Rosa Parks was not the first black woman in Montgomery to be arrested for refusing to move to the back of the bus. There were two before her, but local black leaders declined to make test cases out of them. They waited until 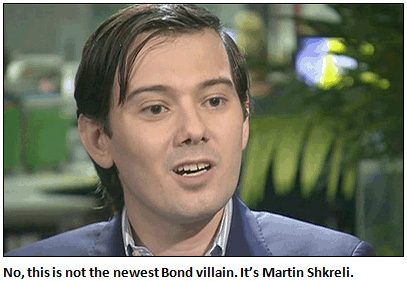 they found someone who was sure to gain white sympathy, and Parks fit the bill.

Martin Shkreli is sort of the anti-Rosa Parks. Lots of companies have jacked up the price of drugs before, and they got only blips of attention. Then Shkreli came along and jacked up the price of Daraprim from $13 to $750—and instantly became the poster child for evil scum. That’s because he was perfect for the role. He’s a Wall Street hedge fund guy. He was fired by a firm he founded when the board accused him of using the company as a “personal piggy bank to pay back angry investors in his hedge fund.” He looks like a callous young punk. And instead of hiding behind a PR flack, he happily gave interviews where he all but told the world to fuck off and pay his price if they wanted Daraprim.

That makes this whole story too good to check. Why interfere with the public lynching of a guy who seems to richly deserve it? And yet, you still wonder how he got away with this. Daraprim is just pyrimethamine, a drug invented decades ago and no longer under patent. Why doesn’t someone else make it?

The usual answer is that it’s not worth anyone’s time. In the United States it’s primarily used to treat toxoplasmosis and accounts for only about 10,000 prescriptions a year. If you’ve already done the chemistry and the marketing and the manufacturing setup, you might as well keep making the stuff. But starting up from scratch involves high fixed costs, and it’s not worth it. So Shkreli is safe. He can charge sky-high prices in the certain knowledge that no one will enter the market to compete with him.

But Alex Tabarrok says that’s not quite the case. Lots of companies make pyrimethamine overseas, and for them startup costs aren’t an issue. The problem is that none of them have gotten FDA approval to sell in America, and that’s expensive and time consuming. Basically, Shkreli is engaging in regulatory arbitrage, with the high fixed cost of FDA approval keeping him just as safe from new competitors entering the market as the fixed cost of starting up a manufacturing line.

This got me curious. Tabarrok concedes that Indian or Chinese generic drug makers are a little dodgy, and the FDA might be right to insist on keeping their products out of the country without rigorous testing. But what about European 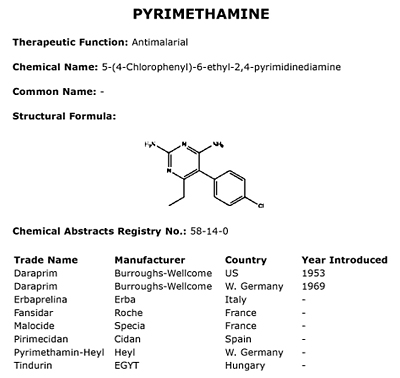 drug makers? Why not give them reciprocity? If a generic drug is approved in Europe, go ahead and provide streamlined approval in the US. Why not trust European drug regulators?

Actually, it turns out to be even weirder than that. Take the case of Fansidar. It’s a combination of pyrimethamine and sulphadoxine made by Roche. It was approved by the FDA in 1981 and went on the market in 1982, primarily as an anti-malarial drug.1 Roche has sold bazillions of tablets since then, and the cost seems to vary from a dollar or two in small quantities to a few cents in large quantities. It has even been tested for toxoplasmosis and found to be pretty effective.

So, Roche already manufactures pyrimethamine. They already have FDA approval for a drug that contains it. They already have a well-respected manufacturing capability. And they already have distribution in the United States. All they’d have to do is make the same tablet but without the sulphadoxine and put it on the market. If the FDA were willing to streamline the approval, the startup costs would be very low.

Now, for a company the size of Roche, it might still not be worth it. But there are plenty of other companies that make pyrimethamine/sulphadoxine combinations. If the FDA offered quick approval for a pyrimethamine-only tablet, I wonder if someone would take them up on it? Legally, the FDA is not supposed to consider cost in its approval process, but surely it would be worth making an exception just to see Shkreli take a bath on his cute little scheme.

1I gather that it’s no longer a state-of-the-art treatment for malaria, but that doesn’t matter for our story.