I mentioned this last night, but I want to call it out specifically this morning: Jake Tapper sounded like he was auditioning for a place on Celebrity Apprentice during his moderation of the Republican debate. Over and over, instead of simply asking questions, he framed them in terms of something Donald Trump said. It was all Trump, all the time. Here’s a complete rundown of his Trump-obsessed 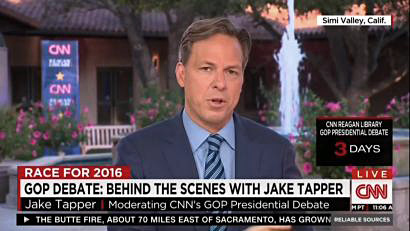 questions from just the segment before the first commercial break (along with a bonus question from Dana Bash):

TAPPER: ….Louisiana Governor Bobby Jindal, has suggested that your party’s frontrunner, Mr. Donald Trump, would be dangerous as President. He said he wouldn’t want, quote, “such a hot head with his finger on the nuclear codes.”

TAPPER: You didn’t answer my question. Would you feel comfortable with Donald Trump’s finger on the nuclear codes?

TAPPER: Governor Bush, would you feel comfortable with Donald Trump’s finger on the nuclear codes?

TAPPER: ….Governor Bush, you recently said while discussing Planned Parenthood, quote, you’re “not sure we need a half billion for women’s health issues.”….But Donald Trump said….

TAPPER: In an interview last week in Rolling Stone magazine, Donald Trump said the following about you….

TAPPER: With all due respect, you said about Donald Trump’s plan to deport 11 to 12 million undocumented immigrants, “People who say that have no idea what this entails.”

BASH: Governor Bush, Mr. Trump has suggested that your views on immigration are influenced by your Mexican born wife….

TAPPER: Ms. Fiorina, the vast majority of countries do not have birthright citizenship. Donald Trump is right about that….

TAPPER: ….Ms. Fiorina, you were CEO of Hewlett Packard. Donald Trump says you, quote, “ran HP into the ground,” you laid off tens of thousands of people, you got viciously fired.

TAPPER: Donald Trump says that the hedge fund guys are getting away with murder by paying a lower tax rate….Do you agree?

This is ridiculous, and it demonstrates the bankruptcy of the political press corps. John Kasich even complained about it early on, and Tapper promised, “We are getting to the issues, sir.” And he did—but usually by quoting Trump and demanding that the candidates respond to what Trump said.

I’m genuinely surprised that no one else on the stage called Tapper out on this. Hell, Tapper even expected it, and it would have been a good moment. “Jake, Donald Trump is a buffoon. Who cares what he says? Can you please run a real debate and start asking us questions about what we’d do as president of the United States? The stakes are too high to be playing these games.” That would have taken down Trump a notch and attacked a mainstream media figure, which always plays well with Republican crowds. I wonder why no one took the opportunity?