The Tax Foundation is a conservative outfit that’s predisposed to like Jeb Bush’s tax plan. They believe it will increase GDP by 10 percent over the long term, which will pay for more than half of the plan’s cost. Jeb’s tax cuts, they conclude, “would greatly increase the U.S. economy’s size in the long run, leading to higher incomes for taxpayers at all income levels.” 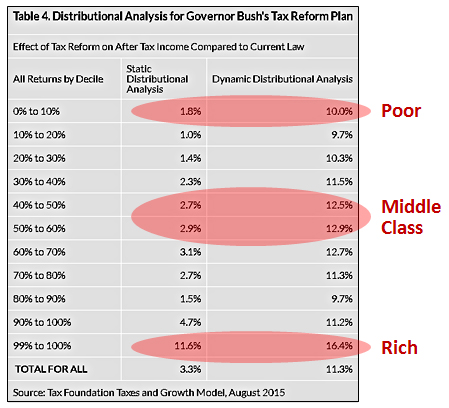 It turns out that even the Tax Foundation can’t make Jeb’s plan look anything close to fair. Under a normal (i.e., “static”) estimate, here are the effects on income:

Yowza! That looks pretty bad. Something has to be done about this, so let’s do a “dynamic” estimate that assumes these tax cuts will hypercharge the economy. That helps, but not enough:

The Tax Foundation has a very rosy view of dynamic effects, which are almost certainly far less than they estimate. But even if you take their analysis at face value, Jeb’s tax plan is still tilted heavily toward the rich. They don’t just get a bigger cut in absolute dollars, they get a bigger percentage cut.

That’s not surprising. When credulous reporters are around, Jeb’s team highlights the plan’s cap on deductions and its elimination of the carried interest loophole. But that’s small potatoes compared to the huge rate cut at the top, the elimination of estate taxes, and the cut in the corporate tax rate. The end result is the usual one for Republicans: the rich get a big tax cut while the poor are bought off with beads and trinkets.