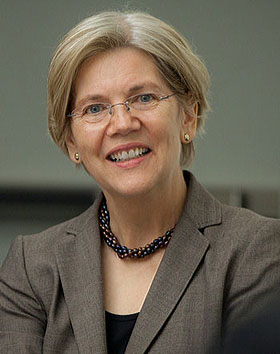 The basic bargain of the Clinton campaign is breaking down: Democrats increasingly feel they need other options in case Clinton turns out to be much less electable than they thought. So far, that search has manifested in an odd yearning for a third Joe Biden presidential campaign.

But it’s always been Warren—not Biden—who seemed like the person who could actually beat Clinton in a primary, who is a more charismatic campaigner than Clinton, who is better than Clinton at garnering positive media coverage, and whose record is more in touch with the populist mood of the electorate. And it’s Warren—not Sanders—whom the left wing of the party wanted to recruit as its champion.

I don’t see it. Warren’s obvious problem is that it’s too late: She just doesn’t have time to set up a serious campaign with serious fundraising anymore. It’s probably too late for Biden too, but at least he has decades of political experience and a big base of supporters that he could call on if he decides to run.

But Warren has an even bigger problem: Her background is just too narrow. This is a problem for Sanders too, but at least he has a well-established record on a wide range of domestic issues and is campaigning on a broad platform of tackling income inequality. Warren, by contrast, is focused like a laser on one thing: Wall Street. I’m sure she has fairly conventional Democratic views on everything else, but she rarely talks about them because she wants to stay focused on financial abuse. This is probably smart on her part, but it makes her a poor choice as a presidential candidate.

A few years down the road this may change. But right now she looks attractive mostly because no one has gone after her yet. She’d look a whole lot less shiny if she threw her hat into the ring this year, and I think she knows it. That’s why she’s not running. She understands this stuff a lot better than many of her supporters do.