Donald Trump’s poll numbers are falling, and political scientist John Sides says it’s because the media is covering him less. The chart on the right tells 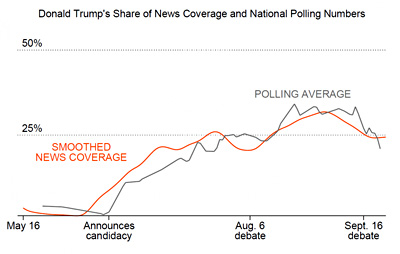 his tale. When the media started covering Trump heavily, he surged in the polls. When they tapered off, he began to drop.

I’m not quite sure how you disentangle the two. Sides acknowledges that this is probably a “self-reinforcing cycle,” but how much is coverage driving polling versus polling driving coverage? There’s no way to tell.

But there is a further bit of evidence that would be helpful: What does this chart look like for other candidates? In particular, people like Fiorina, Carson, and Sanders, who have surged, as well as folks like Walker and Bush, who have declined. Do those candidates follow a curve that matches the coverage they got? The data is all there, so it should be easy to take a look.

For what it’s worth, I think that Trump is just following the usual path of pop culture stardom: a fast rise when he does something to gain attention, followed by decline as people get bored with him and turn to something new. This cycle normally takes months or even years, but in the hothouse environment of a political campaign it’s more like weeks. Unlike, say, Hillary Clinton, Trump doesn’t have a solid base of support built up over years. He’s purely a fad, so his rise and fall are especially fast and spectacular. The media surely plays its role in this, but so does real life.