Ryan Cooper wants more debates. Before we boo him off the stage, though, note that he’s asking for more Democratic debates. And he thinks Hillary Clinton ought to be in favor. Here’s why:

It would stop Republicans from dominating 2016 coverage….While a lot of the attention is negative due to half the candidates being strap-chewing lunatics, it’s still building a sense of excitement.

….It would give the political press something to talk about besides the endless, pointless Clinton email story.

….Clinton could probably use the practice. I still remember the first presidential debate in 2012, when President Obama was roundly defeated by Mitt Romney. Obama looked like a very powerful man who was not used to being sharply challenged, and came off as simultaneously haughty and unsure of himself. Hillary Clinton is a smart, capable person, but sycophantic courtier syndrome is a real thing, and a square debate on equal 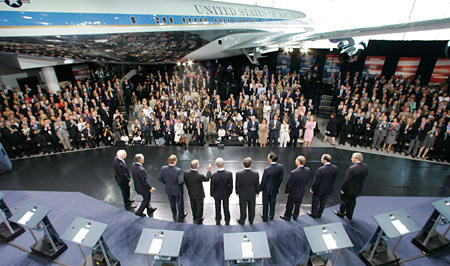 footing is one of the few ways someone of Clinton’s fame and standing can work against it.

Let’s examine this. More debates would be fun. On the other hand, it would mean yet more long nights of liveblogging for me. On the third hand—wait a second. I’m curious about something. Do other countries have debates? According to Wikipedia, yes. The following countries have regular campaign debates:

That’s not very many. Thirteen countries out of 200—and only seven that aren’t part of the old British Empire. It’s a little odd that the Anglo-Saxon bloc is so gung-ho on debates, considering that Mother Britain didn’t have its first televised debate until 2010. Of course, they only held a grand total of three, but then again, their campaign season only lasts six weeks. At that rate, we’d have 30 or 40 debates in America.

Anyway, what were we talking about? Oh yes: should Hillary Clinton welcome more debates? I’m going to say no. A presidential campaign is obviously a zero-sum affair, and all her competitors want more debates. Unless they’re idiots, that’s because they think it will benefit them—which it would, by giving them priceless exposure. Obviously Hillary has no interest in that, so like most front runners she wants fewer debates.

All other arguments aside, then, the DNC is unlikely to change its mind on this. So tune in on October 13 for the first Democratic debate, held at the fabulous Trump Las Vegas. Just kidding. That would be a hoot, though, wouldn’t it? It will actually be held at the fabulous Wynn Las Vegas, owned by a Democratic billionaire rather than a Republican one.