I’m not going to lie. I’m beat. That was a helluva long debate. And I even watched some of the early debate too. I’m not too proud to cry uncle.

So I don’t have a deeply considered intsta-take on the whole thing. Instead, here’s my quick impression of whether each candidate hurt or helped himself tonight:

Trump: Hurt himself. The first few minutes was a juvenile parade of insults. The split screen shots showed him mugging and making faces whenever the other candidates were talking. His jabs felt tired. He practically reveled in his ignorance. Not a good performance. Warning: This is what I thought after the first debate too.

Carson: Hurt himself. On the plus side: he’s a crazy man, but very little of that was evident tonight. For those who want an outsider, but one who sounds kinda sensible, he probably seemed like a good choice. 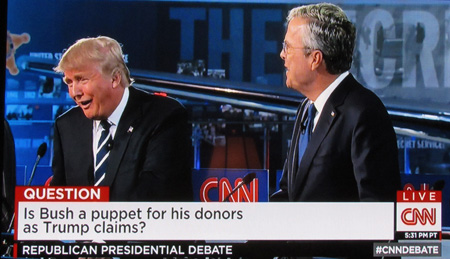 On the minus side: He didn’t really stand out. Given his high poll numbers, that’s probably a negative for him.

Bush: Helped himself. He showed more energy than before, and got in a few good shots at Trump. But he’s still monotonous enough that nothing he says ever seems to make a permanent impression. So he might have stopped the bleeding, but he probably only helped himself a little bit. He really needs to learn how to make one or two sharp points and then shut up.

Fiorina: Helped herself. Mostly this is just by virtue of being in the main debate. Aside from that, she was a mixed bag. Sometimes she sounded strong and well prepared. Other times that shaded over into sounding rehearsed.

Rubio: Helped himself. He mostly stayed out of the insult scrums, and seemed like a breath of fresh air when he delivered a decent, adult-sounding answer to the question at hand. Like Bush, though, he sometimes delivers too much of a laundry list, and delivers it too fast. He needs to slow down and hit just a few high points instead.

Walker: Hurt himself. I don’t think he made any big mistakes, but he really needed a strong showing to reverse his slide. He didn’t deliver one.

Kasich: Hurt himself. I’m not sure about this one, but my sense was that he was trying to seem like a sensible moderate but instead sounded a little incoherent and wishy washy. But I could be wrong about that.

Paul, Christie, Huckabee, Cruz: Who cares? Huckabee sounded like a madman, and the others sounded OK but not special. It’s hard to think that tonight’s performance will do much for any of them. They should probably all drop out.

Jake Tapper: I’ve got nothing against the guy, but he really deserves to be dinged for constantly framing his questions as “Donald Trump said _____. What do you have to say about that?” That’s good for a food fight, I guess, but it’s a disservice to the candidates and to the audience. There’s really no need to make Trump the center of everything, and there’s no need to force the other candidates to respond to every ditzy thing he’s said.

And that’s that. I forgot to buy cat food at the market today, so I have to go out and get some. Right now that’s Job 1. I’ll leave further analysis to the spin room and the talking heads.

Get comfortable, folks: you have three hours of Republican debatifying ahead of you. Let’s do this thing.

11:10 – Fiorina’s closing statement sounded like a well-rehearsed high school commencement speech. Maybe that goes over better with other people than it does with me.

11:07 – Bush’s closing statement included the phrase “structural fiscal problems.” This might just sum up his problems relating to the base.

10:58 – Trump really does seem to enjoy it when someone gets in a good jab at him.

10:51 – Huckabee: “Why doesn’t this country focus on cures rather than treatment” of heart disease, cancer, diabetes, and Alzheimer’s? Gee, that’s a great idea. I wonder why no one’s thought of it before?

10:48 – Trump wants lower doses of vaccines over longer periods of time. Oh my God. Apparently he thinks autism is caused by too large a dose of vaccines.

10:47 – Carson: Vaccines are pushed by big government. I’m not sure that’s what’s really behind the anti-vax movement.

10:43 – Christie: We can stop climate change without government intervention. I’d love to hear the details behind that.

10:41 – Christie: Social Security is going to be insolvent in seven to eight years. Huh? And we can fix it by tightening up disability. Again, huh?

10:38 – Rubio: Obama is undermining our values, which explains why violence is endemic. Except, of course, that violent crime has declined over the past seven years.

10:21 – Would Huckabee have a litmus test for Supreme Court justices? Oh hell yes.

10:17 – Fiorina is tossing out numbers to try to sound knowledgeable about military affairs. It’s not working. She sounds like a student reciting in class. She should have mentioned Ohio-class subs in order to suck up to Hewitt. 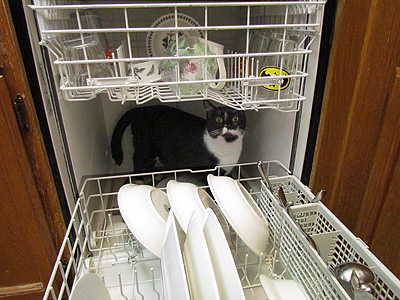 10:15 – Getting a little woozy after two hours of debating? Here’s a cat in a dishwasher to cheer you up.

10:12 – Walker refuses to say how many troops he’d send to Iraq. What a surprise.

10:05 – The most entertaining part of tonight’s debate—by a mile—is the split-screen views of Trump shrugging and mugging while the others talk.

10:01 – Hewitt wants Trump to name a few names of people he might rely on in office. (Other than Carl Icahn, I assume.) He immediately changes the subject. So Trump doesn’t know shit, and doesn’t know anyone either. He’s really reveling in his ignorance tonight.

9:58 – I just realized that I can’t really remember any policy position Bush has taken tonight.

9:55 – Trump promising yet again that although he doesn’t know shit now, he’ll be up to speed by the time he gets inaugurated. Honest.

9:53 – Rubio seems to be mostly avoiding the food fight. He’s sounding pretty presidential, I’d say. But maybe too much of a laundry list style of speaking. On the fact-checking front however, North Korea doesn’t have “dozens” of nuclear weapons.

9:46 – Hugh Hewitt: Is it wrong not to attack Hillary Clinton at every opportunity? Hmmm? Deep, Hugh. Very deep.

9:44 – Carson thinks we need to get everyone together to negotiate a proper minimum wage. I wonder why no one’s thought of that before? He also wants to index it to inflation. Socialism!

9:42 – Trump says progressive taxation is “not a socialistic thing.” He’s right. Of course, so is a stopped clock occasionally.

9:37 – Somebody on stage needs to take a shot at Tapper. He probably deserves it, and conservatives always love attacks on media figures.

9:34 – Trump wants credit for doing great in Atlantic City, but says his bankruptcies don’t count. Not quite sure how he gets away with this.

9:30 – How many of Jake Tapper’s questions have been framed as “Donald Trump says ….”? Why not just ask the damn question?

9:27 – Fiorina asks why Obama got nothing done on immigration. Um, because the Republican base revolted and the Republican caucus caved in on comprehensive reform and declined to pass anything? 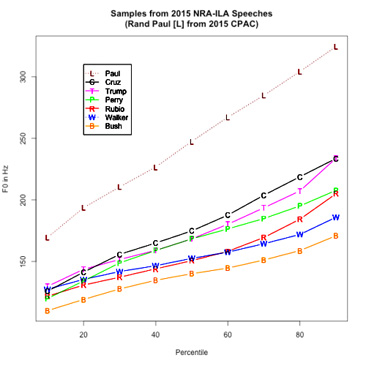 9:17 – By the way, it turns out that Science™ explains why Jeb seems weak compared to Trump: It’s because his voice is monotonous and boring. The chart on the right shows what’s going on. Bush is the most boring sounding of all the candidates.

9:08 – Tapper wants Carly to respond to Trump’s crack about not wanting to look at her face for four years. Fiorina says “women all over this country heard very clearly what Mr. Trump said.” Not bad. Trump seems almost admiring.

9:04 – Trump thinks we should talk about North Korea. OK. But Trump declines to say what he’d do about them.

9:01 – Fiorina somehow turns a question about Planned Parenthood into an answer about Iran. Not sure if I’m impressed or appalled.

8:59 – Christie refusing to answer whether he’d shut down the government over Planned Parenthood funding. Boo.

8:49 – Trump says GOP senators bear some responsibility for Syria problems since they refused to support Obama when he asked for authorization to attack Assad. Rubio responds that he refused because Obama only wanted to deliver a “pinprick.” Pretty good answer.

8:39 – Fiorina would deal with Putin by building a kick-ass military and refusing to talk to Putin. OK. Then she starts talking about why it’s important to know who General Soleimani is. Not sure most viewers are going to get the context for that.

8:37 – Rubio has managed to avoid the junior high school scrum so far. Good for him. Now giving a perfectly serviceable answer about Russia and Putin.

8:35 – Sort of fascinating watching Trump and Bush do a straight-up alpha-chimp competition with each other.

8:26 – How has Trump managed to convince the world that he’s a great negotiator, anyway? What deals has he made that are all that spectacular?

8:24 – All the pre-debate buzz was about how Trump would be little more sober and low key. Not so far. He’s all insults all the time.

8:22 – Rand Paul: a “sophomoric quality” to Trump. We should have left that behind in junior high school.

8:20 – Fiorina already dodging. Refuses to say Trump shouldn’t be trusted with his finger on the nuclear button. C’mon Carly.

8:08 – Everyone has a notebook, water, and a pen. No other props allowed. But what about spy pens?