In a story which appeared sometime in the past few days,1LA Times reporter David Savage notes something that’s been nibbling at the back of my mind but hadn’t quite made it to the front. It’s about Chief Justice John Roberts:

He voted against gay marriage, in favor of weakening a federal law against racial bias in housing and for the Arizona Republicans who challenged the state’s independent panel that draws election districts. He joined 5-4 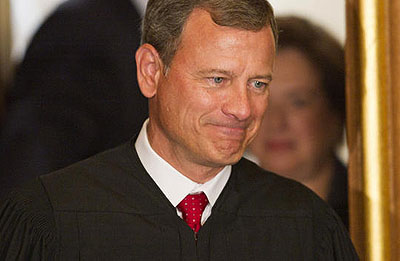 majorities to block an Obama administration clean-air rule and to uphold a state’s use of substitute drugs to carry out lethal injections.

But as Roberts this week marks the 10th anniversary of becoming chief justice, he finds himself in the crosshairs of right-leaning pundits and GOP presidential hopefuls who brand him a disappointment and openly question his conservative credentials because of the one case of the six in which he voted with the court’s liberals. The decision marked the second time Roberts had voted to uphold President Obama’s healthcare law.

Roberts has indeed been getting a lot of flak from conservatives, despite the fact that on high-profile cases he’s been pretty much a conservative’s dream. The only big case in which he deviated was Obamacare. But whether conservatives like it or not, this really does demonstrate a very conservative sense of judicial restraint. Obamacare was a historic and substantial piece of legislation duly passed by Congress and signed by the president shortly after a landslide election, and in the end Roberts was unwilling to strike it down on a thin pretext.

But relitigating Obamacare isn’t the point here. The point is that this is the only major case where Roberts has deviated from political conservatism, and he’s been practically disowned because of it. Compare that to the fate of liberal justices Stephen Breyer and Elena Kagan. They both joined conservatives in striking down mandatory Medicaid expansion, a major piece of the law. Liberals were almost unanimously aghast.2 But that was it. It was one case. There’s been no big movement among liberals to disown them and demand that future presidents appoint more reliably liberal justices.

Now, you can argue that conservatives have good reason to be ultra-vigilant, having been serially disappointed by justices Harry Blackmun, John Paul Stevens, and David Souter. Still, this backlash against Roberts carries real risks for conservatives:

That same month [when he upheld Obamacare for the second time], he joined with Kennedy and the court’s liberals to block most of an Arizona law that targeted immigrants living there illegally. Roberts agreed that federal authorities, not the states, had control over immigration policy.

Since then, [Brianne] Gorod says there has been some shift in Roberts’ votes and opinions. “He now occasionally breaks company with his conservative colleagues,” she said. “He is concerned about the reputation and legitimacy of the court. He’s also concerned about increasing partisanship in Washington. This doesn’t mean he is becoming a liberal.”

One of the things that conservatives have generally done better than liberals is to avoid mocking people who might one day join the cause. Here they’re running the risk of doing just that. If conservatives make it clear that they now hate Roberts’ guts, his tribal affiliations are going to weaken. That may not be judicially defensible, but it’s human nature. If they don’t want to end up with another David Souter, they should cool it on Roberts. Otherwise they might end up with one sooner than they think.

1It was on the front page of the print edition today. The search function says it doesn’t exist at all. The online version—finally located via Google—says it went up on the 25th. Typical LA Times.

2Except for me. I continue to think it was the legally correct decision.