After he was quoted in Rolling Stone insulting Carly Fiorina’s looks, Donald Trump said he was really talking about Fiorina’s “persona.” So last night Jake Tapper asked Fiorina if she wanted to comment on Trump’s persona. She paused, then replied stonily, “Women all over this country heard very clearly what Mr. Trump said.” 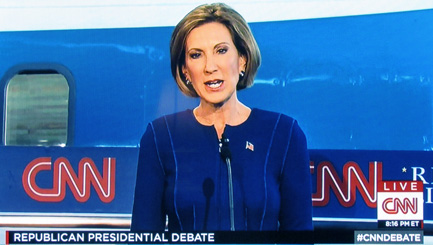 Not bad. She didn’t get down in the mud with Trump, but still responded with some vigor. But that wasn’t enough for a lot of commenters. Here’s a smattering of reaction:

I guess there are two possibilities here. First: It really was a killer moment and I’m just too jaded to see it. Second: It’s an example of the internet’s penchant for everything being the BEST EVER. John Oliver demolishes something or other every week. President Obama delivers the perfect response to the outrage of the day. Carly Fiorina owned Donald Trump.

For now, I’m still going with door #2. It was a good moment. And Fiorina did well in last night’s debate: I’d say she and Marco Rubio probably helped themselves the most. But she didn’t slay, kill, or own Donald Trump. She just delivered a decent jab.

And by the way, Trump was more right than wrong about Fiorina’s tenure at Hewlett-Packard. Her star is going to fade considerably once the press starts relitigating that. Now that she’s one of the front-runners, that should happen pretty soon.